Kavita Srinivasan is a Senior Analyst at the CCC, looking at how Agricultural emissions reductions should form part of the Governments wider strategy for meeting carbon budgets. Here Kavita tells us about an Anaerobic digestion plant installed on a farm… 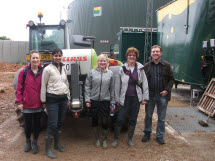 The plant consists of two digester towers, which are fed on a combination of slurry collected from the dairy farm as well as maize (produced at a local arable farm on poorer quality land) and grass silage, which together form an optimal feedstock mix.

The feedstocks are mixed in the towers on a 90-day cycle, producing a biogas which is then converted into electrical energy, which is sold directly into the national electricity grid.
At completion of the digestion process, a nutrient-rich digestate is produced from the waste products which is then separated into solids and liquids. The solid digestate is spread back to cropland (used to grow maize) and the liquid slurry to pasture land, providing a nutrient recycling system and saving the farm in fertiliser costs.

As a renewable energy generator, the plant will earn returns from the ROC scheme as well as tariffs received from selling the electricity generated. Gwyn anticipates a payback for his investment in 4 to 5 years.