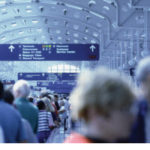 The Committee’s analysis of the contribution that UK aviation could make to reducing emissions of greenhouse gases  has been published in ICAO’s 2010 Environment report.

The second International Civil Aviation Organisation (ICAO) environmental report, is dedicated entirely to the topic of climate change. It brings together an array of ideas, solutions and challenges to feed the global discussion on how best to deal with the impact of aviation on the environment, in an effort to  accelerate moves to reduce aviation emissions.

The Committee was invited to provide a paper as part of Chapter 1 which focuses on aviation’s potential contribution to tackling climate change. The Committee’s paper, written by David Kennedy, Ben Combes and Owen Bellamy summarises some of the key recommendations from the Committee’s Aviation Report which sets out how the UK can meet its 2050 aviation target through a range of measures including improving fleet fuel efficiency, using biofuels, encouraging modal shift and introducing policies to limit demand.

The United Nations, Secretary-General, Ban Ki-moon who wrote the foreword of the report said:

“Air travel has brought many benefits to modern life. Let us ensure that, from now on, it benefits both people and the planet”.