By Steve Smith, Scientific Adviser at the Committee on Climate Change 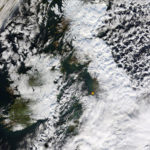 Whilst the UK shivers in the cold and snow for the third winter in a row, Transport Secretary Philip Hammond has asked John Beddington, the government’s chief scientific advisor, to say whether we should be expecting more of these harsh winters in the coming years.

The first thing to say is that the cold winter here is not evidence against the scientific understanding of climate change underpinning our advice on carbon budgets. For example, the cold weather here contrasts with the relatively warm weather recently experienced in Greenland. More generally, the long-term trend is one of significant warming at the global level since the industrial revolution.

Looking forward, everyone knows that weather forecasts aren’t perfect, particularly beyond a few days. This raises the question: how can people predict the climate in 2100 when we can’t even predict what it will be like next week? The answer is that we can say something about likely long-term trends, although weather at specific locations and times farther into the future is highly uncertain.

But that doesn’t mean I have no information at all about future throws. Over time, as the dice keep rolling, patterns will emerge. If the dice are not loaded then I will see a roughly equal likelihood of getting each number from one to six. And if the dice are loaded, it will be given away by the statistics emerging over these rolls.

Roughly speaking, weather is the result of an individual roll, and climate is the overall statistics. We can’t predict if it will be sunny in the UK on a given day many years from now, but we can look at likelihoods. And we can see the climate becoming more and more loaded towards warmer temperatures (at least the global average level) as heat-trapping gases gather in the atmosphere.

Returning to the question that John Beddington has been asked, climate scientists have started to actively research seasonal to decadal forecasts.  There are some things in the climate system that can give us a clue here, such as slowly-varying ocean temperatures, but such forecasts are still in their infancy. And the information that comes out will always have to be communicated in terms of likelihoods rather than specific weather events.

Which leads us to the rub: what if scientists are able to produce reliable predictions? For example, let’s say we think there’s a 75% likelihood winters will be warmer than the recent average. If next year turns out cold again, does that mean the prediction was wrong? Going back to the analogy of the dice, if I guessed a six for the next roll, on the basis that I know the die is generally loaded towards sixes, but I get a one instead, does that disprove the theory that the die is loaded?

This aspect of forecasting means the method of communicating the results is as vital as the result themselves. The government will make decisions with important consequences using this information, such as the number of snow ploughs to have ready and the amount of grit. A changing climate means we will have to adapt the way we do things while still bearing in mind that the weather will continue to throw us the occasional surprise.

Getting this right, and explaining to the public what seasonal forecasts actually mean, will be a tough but important task.