By Sebastian Catovsky, Head of the Adaptation Sub-Committee

The Thames Barrier is one of the country’s most high-profile symbols of adaptation. It was fitting, therefore, that the Committee on Climate Change adaptation team recently visited the Thames Barrier for its monthly test closure. 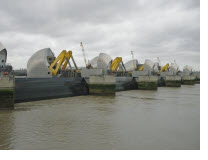 This month’s test closure was a bit different, because it was timed to coincide with a simulated East Coast storm surge, as part of Exercise Watermark, the Government’s test-run of its emergency procedures to respond to a severe flood event.  The exercise was set up in response to the Pitt Review after the major floods in Summer 2007, which damaged 55,000 homes, led to the death of 13 people, and cost the economy £3.2 billion (2007 prices).

As the Adaptation Sub-Committee’s first report highlighted, emergency planning is a priority for early adaptation action.  It will make the UK more resilient to today’s climate and increase the UK’s preparedness in the future.  The benefits from better emergency planning for extreme weather will remain regardless of the amount of climate change in the future, and therefore the measure is known as a “low-regrets” adaptation option.

In its second report due this summer, the Adaptation Sub-Committee will develop some of the themes highlighted by the Thames Barrier visit.  In particular the Sub-Committee will set out some indicators to measure how the UK’s vulnerability to climate is changing and how climate risks are being incorporated into decisions in priority areas for early adaptation action.