“There have been two sobering climate change statistics recently. First we learnt that despite a sluggish economy, global emissions of carbon dioxide grew by a whopping 6% between 2009 and 2010. This was followed by a report by the International Energy Agency (IEA), which last week warned that without a bold change of policy direction, the world will lock itself into an insecure, inefficient and high-carbon energy system.

This doesn’t bode well for world targets for avoiding dangerous climate change. What the IEA report tells us is that there is a danger that in the next five years we build so many fossil-fuel power stations, energy-sucking factories and  inefficient buildings the world-over that the chances of limiting global warming to 2oC – a widely shared global ambition – greatly diminish.  Governments are due to meet in Durban, South Africa, at the end of this month at the United Nations climate change conference to discuss the targets that countries have set for reducing their emissions. 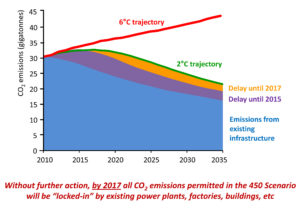 So how does the situation in the UK look against this rather bleak global context? The UK is still in a better place than most other economies.  Our emissions went up in 2010 too, but that was due to one-off factors like two exceptionally cold winters that pushed up heating emissions in both the first and fourth quarter. Structurally, UK emissions have peaked and are on a downward trajectory.  Or at least this will be the case if the government sticks to its current intentions. The government is developing policy (such as Electricity Market Reform, the Green Deal and the Green Investment Bank) to drive decarbonisation, the first glimpses of which seem relatively sensible.

But what if things do not go to plan? Together with energy company Npower, researchers at the Grantham Research Institute recently looked at four different energy scenarios for the UK in the 2020s. Not all of them make for happy reading

If the Government sticks to its plan the UK is poised for two decades of aggressive de-carbonisation in the power sector and elsewhere, during which energy companies will invest heavily in renewable energy, particularly offshore and onshore wind. Nuclear power capacity will increase and some coal generators will be co-firing biomass. Solar photovoltaics will become more common as costs fall. Carbon capture and storage (CCS) for coal and gas will move to full commercial deployment from the 2020s. Marine power technologies will emerge. Investments in energy efficiency, a smart grid and other measures will start to roll out to keep the increase in costs as low as possible for consumers.

But what if the Government loses heart and goes for the easy option – a new dash for gas-fired power stations that the market knows how to finance and build, and which may become cheaper with the advent of shale gas? In the short term that may look cheaper, but there will be a price to pay later. If our statutory carbon budgets are allowed to be broken (which is highly likely under this scenario) there will be, at a minimum, political embarrassment and more likely NGOs will come together to force a judicial review. Either way, policy uncertainty is inevitable. Investors may find that their new gas-fired power stations require a costly retrofit with CCS, or can only be run (and earn revenue) for very limited periods of time, basically to provide back-up capacity to low-carbon plant.

Perhaps the Government won’t lose heart. But what if investors think it might or if policy signals are so confused that the billions of pounds needed for low-carbon investment are not forthcoming. We may end up with an investment shortfall where outdated power plants are forced to remain in service just to keep the lights on. Never mind the environmental and economic consequences. We may end up with a creaking power sector stretched to its limits and correspondingly unreliable. A little bit like the transport systems of the 1990s and 2000s.  This will either mean black-outs or short-term price fluctuations to balance supply and demand at short notice.

In the fourth scenario the Government sticks to its environmental targets but it turns out that the technology and cost forecast of the 2010s were overly optimistic and costs spiral.  CCS does not fulfil its promise. Nuclear is afflicted by cost-overruns or perhaps we follow Germany’s lead and give up on the technology altogether. The cost of off-shore wind remains stubbornly high.

The four scenarios make it plain that there is no credible alternative to the government’s current plans. So how do we get to where we (in,the UK) need and want to be?

It is easy to see why a new dash for gas may be tempting for the short-sighted. The UK has to make some decisions about what role shale gas has to play in the future energy mix. Whilst it can help us meet near term targets, there is the threat of “lock in” described by in the IEA’s World Energy Outlook. Going headlong for shale gas is also  likely to divert investment away from renewables, bringing down the costs of which must remain the priority for the government.

Clearly we need political leadership to make sure we make the right long-term decisions and end up in the right place. So far in the UK we still have the political intention to meet our targets. The ambitious fourth carbon budget was approved with an overwhelming Parliamentarian majority only this summer. Yet, investors could be forgiven for doubting our commitment if they read the wrong newspaper or listened to  George Osborne at this year’s Conservative party conference. So sending a clear, unambiguous policy signal to the market is essential. Otherwise the billions in low-carbon investment we need will not be forthcoming.

Now is not the time for us to wobble on our climate commitments.  It’s time for UK policy to show that there is strength in our conviction. As was argued in the Institute’s recent policy brief The Basic Economics of Low Carbon Growth in the UK, failing to show clarity and confidence by being shaky, or appearing to be shaky, now on our carbon budget commitments will damage private sector investment in low-carbon technologies, harm growth and create uncertainty that will ultimately raise the cost of future investment.

What is the point of the UK doing all this when total UK emissions are less than the increase in global emissions last year? Clearly, we cannot do this alone. But other countries are taking action too. Work carried out at the Institute shows 155 climate laws are now in place across the leading 16 countries. Australia recently voted in a carbon tax which is in many ways as significant as the EU Emissions Trading Scheme, and others including China, Korea and California are making positive steps towards their own carbon pricing schemes.  More work is still needed. We still need a global roadmap to put the world on-track to a green economy. But it is a start and it will allow a new global deal to be based on domestic action.

And as surprising as this may sound, many of the countries taking action now are looking to the UK for leadership and to learn from our experience. Behind the scenes UK experts, including our own at the Grantham Research Institute, are engaging with governments from around the world to compare notes, discuss policies and identify successes and failures. The UK has the chance here make a difference and to punch above its weight. Let’s seize it.

Sam Fankhauser is co-director of the Grantham Research Institute on Climate Change and the Environment and a member of the UK Committee on Climate Change, an independent body that advises the UK Government on carbon targets and on preparing for climate change.