By Clare Pinder, Economist at the CCC.

The cost of energy continues to attract much attention, with the average household now paying 70% more for heating, lighting and running appliances than a decade ago.  Although sometimes attributed to climate change policy, most of the rise has in fact come from increases in the international price of gas and the upgrading/replacement of ageing gas pipes and electricity transmission wires.

Going forward, our analysis  suggests £100 will be added to the typical household bill by 2020 due to low-carbon policies. These policies will insure against the risks of dangerous climate change and further rising energy bills.  And there are opportunities to more than offset the £100 impact through energy efficiency improvements.

DECC  also project that bills will increase, but have a higher headline figure of £286 which has been widely quoted.

There are three key differences between DECC’s estimate and ours.

After allowing for these, DECC’s projected bill increase is around £100 in 2020 (see chart).

Another difference is our approach to whether current policies will deliver energy efficiency improvement. Whereas DECC assumes that current policies will be successful and therefore conclude that households will be better off even in the near term, we have questioned whether incentives are strong enough for uptake of low-carbon measures such as loft and cavity wall insulation and more efficient appliances. Given the opportunity to keep bills down through energy efficiency improvement, policy implementation should be closely monitored, and policy should be changed if it is not delivering.

More generally, however, there is a clear and consistent message coming from our analysis and that of DECC: the cost of investing in low-carbon technologies is likely to add around £100 to the typical household bill in 2020, and not the £100s or even £1000s that some have claimed.

Figure 1. DECC and CCC’s estimates of the cost of climate change policies on the household bill. 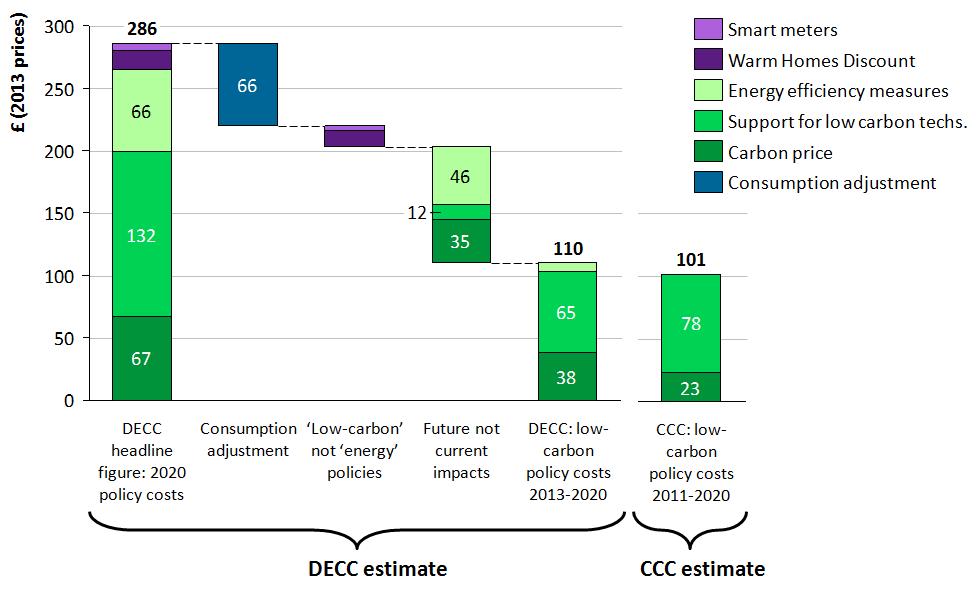 Source: CCC Energy prices and bills – Impacts of meeting Carbon Budgets (2012), DECC Policy impacts on prices and bills (2013).
Note: The first adjustment compares DECC’s consumption on a comparable basis to CCC – i.e. reflects changing consumption from that of an ‘average bill’ (including electrically heated) to a ‘typical’ dual-fuel household bill (using gas for heating and electricity for lights and appliances).  It also reflects using today’s consumption as a baseline rather than DECC’s hypothetical consumption baseline of no past energy efficiency.  The second adjustment reflects the impact of only assessing low-carbon policies rather than all energy policies e.g. removing Warm Homes Discount which assists low-income households.  Finally we remove the costs of these policies to date; and only present the future impacts on the bill out to 2020.

13 May 2013
Member of the Climate Change Committee