This month saw the release of the new Synthesis Report by the Intergovernmental Panel on Climate Change (IPCC). The previous IPCC assessment, back in 2007, was a key piece of evidence in setting the UK’s 2050 target to cut national emissions by at least 80% below what they were in 1990. So it makes sense to take stock and see if that evidence has changed.

The IPCC produces the most in-depth global summaries we have of the science of climate change, its impacts and options for addressing them. The 40-page Synthesis distils the 5,000 pages of three underlying IPCC assessments, the work of over 800 scientists across the world. There is even a two-page summary of the Synthesis for those in a hurry.

So what has changed? In many respects the headline conclusions remain the same:

However, seven more years of research means there is even more certainty in these conclusions and much more detail behind them. Plus there are a few new ones, especially relevant to the UK’s 2050 target:

2°C is the warming limit to which the UK and over 160 other governments around the world have signed up.

In 2008 the CCC found that a roughly 50:50 chance of staying below 2°C this century would require early peaking of global greenhouse gas emissions, a halving by 2050 and further cuts thereafter.

Dividing these 2050 emissions by the expected number of people gives roughly two tonnes per person. This is 80% lower than the average UK person emitted in 1990. We therefore recommended 80% as the ceiling for UK emissions in 2050, as it is hard to envisage many other countries emitting much less than two tonnes per person by then.

So, maintaining the same assumption about a national share, the 2050 UK target still looks appropriate.

Governments will meet again in Paris at the end of 2015 to try and agree on delivering this additional mitigation. No doubt the IPCC line about the risks of delay will be kept in their minds. And for the UK, the legislated UK carbon budgets are designed to reach 2050 in a way that minimises delays and costs. 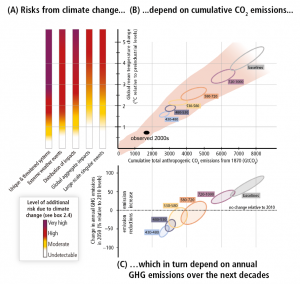 Limiting climate change risks across the five key Reasons For Concern (panel A) implies a limit for cumulative emissions of CO2 (panel B), which constrains annual emissions over the next few decades (panel C). Ellipses show five families of emission scenarios; “430-480” corresponds to a 40-70% cut in greenhouse gas (GHG) emissions in 2050 and a likely chance of staying below 2°C. Source: IPCC AR5 Synthesis Report