Our Chairman Lord Deben, Chief Executive Matthew Bell and I spent 2 days in Northern Ireland in March 2015 on invitation of the Environment Minister, Mark H. Durkan.

In emission terms, Northern Ireland (NI) is the smallest of the devolved nations, accounting for only 3.6% of UK emissions. However, the province faces particular challenges in its efforts to reduce emissions. Agriculture accounts for 29% of emissions there, compared to 11% in the UK as a whole. This reflects the importance of agriculture in the NI economy (1.5% of gross value added versus 0.6% in the UK), as well as a much higher reliance on beef and dairy farming than in the UK. Our analysis suggests that reducing emissions in agriculture is particularly challenging. However, Northern Ireland also has some good opportunities for emission reductions, for example switching from high carbon heating (with much of the country off the gas grid) to renewable heat options.

On our trip, we got an excellent overview of the challenges and opportunities facing Northern Ireland in the pursuit of its 35% greenhouse gas reduction target by 2025. First off, we went to Derry to speak at the inaugural meeting of the Minister’s Prosperity Panel. The Panel has participation from farmers, business people and NGOs, as well as two participants representing the voice of young people. The panel aims to help the Minister implement his vision of improving the environment while creating a stronger economy. Lord Deben and Matthew Bell set out how the transition to a low-carbon future offers new economic opportunities, such as cost reductions through greater fertilizer efficiency, or biomass cultivation for low-carbon heat.

The next morning, we saw a real-world example of the latter on a visit to the farm of John Gilliland OBE. John switched from arable to willow in 1996, as a response to ever wetter winters making cereal growing increasingly difficult. The willow crop is harvested every three years and chipped for wood fuel, some for use on the estate itself and some for sale. John has also set up a biomass boiler company. Since the introduction of NI’s version of the Renewable Heat Incentive in December 2014, biomass boilers have become an attractive option for many farms and rural businesses, as well as off-grid homeowners. With biomass mainly replacing high-carbon oil boilers, there are significant carbon savings. 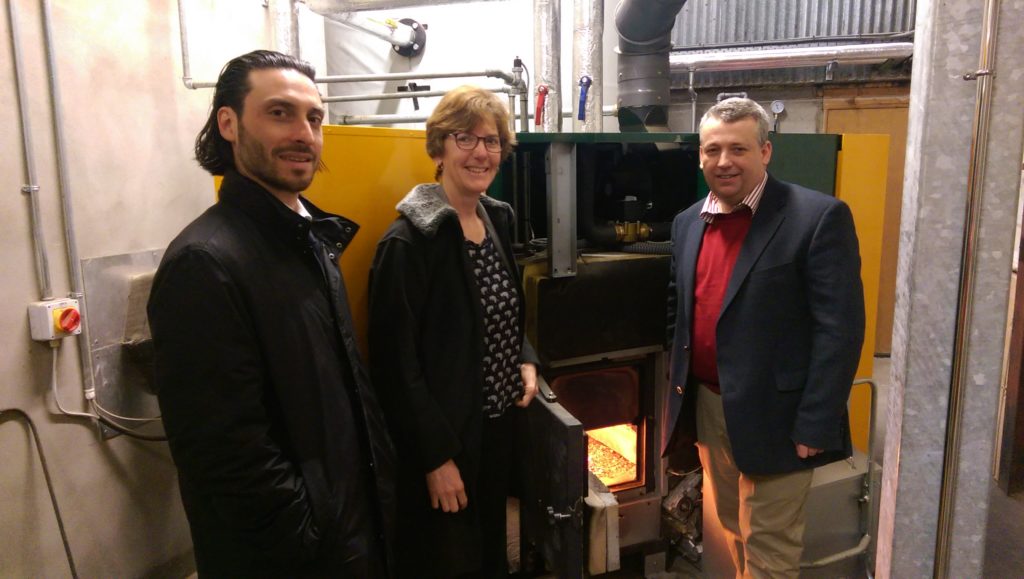 We then took a cross-country route through snowy hills to Cookstown, where Lafarge Tarmac operates NI’s only cement plant. We were invited as special guests to attend the launch of a new voluntary prosperity agreement between Lafarge Tarmac and the Northern Ireland Environment Agency, with the Minister himself signing the agreement. Cement manufacture is one of the most carbon-intensive manufacturing processes and Lafarge Tarmac’s commitment to reduce emissions by 10%, as well as increasing the use of alternative fuels, is an important step forward. Furthermore, the agreement is a good example of joint working between regulators and industry.

Back in London, the new insights gained from the trip will be useful for informing our continuing work to advise the Northern Ireland Executive.

This blog was written by Dr. Ute Collier who heads up the work on the devolved administrations in the CCC secretariat.