Cars and vans are getting more efficient. Since the introduction of EU regulations on CO2 from new cars in 2009, manufacturers have reduced their official emissions by over 16%, and they will have to be cut by a further 24% to meet the target set by the EU for 2020. This is good news, but there’s also a problem: the word ‘official’. Despite improvements to official emissions performance, much smaller improvements are actually being seen on the road.

One NGO, the International Council for Clean Transport (ICCT), has been documenting this issue for several years. The ICCT has taken huge databases of so-called real-world driving from across Europe and compared the recorded fuel consumption to that expected from the official figures. The results are stark; real-world fuel consumption was around 25% higher than the official figure in 2010, and this gap had grown to over 35% in 2014.

The EU recognises this problem and has pencilled-in the introduction of a new testing procedure – the Worldwide harmonised Light vehicle Testing Procedure (WLTP) – in 2017. However, there is still some uncertainty over whether this will fix the problem and reduce the emissions gap. With this in mind, the Committee on Climate Change commissioned the ICCT and Element Energy to investigate the potential for the emissions gap to keep growing in future and what this might mean for CO2 emissions in the UK.

Emissions from cars and vans are regulated using a testing procedure that was last amended in the 1990s (the New European Driving Cycle, or NEDC). It’s mainly based in a lab, mainly carried out by manufacturers and never officially re-checked under real-world conditions. Testing vehicles under controlled conditions is important so that different vehicles can be compared on a like-for-like basis. But as such testing procedures are also used to enforce regulations designed to cut emissions across Europe, the tests also need to be as representative of real-world driving as possible.

The research commissioned by the CCC sets out all the different ways in which the testing procedure is different from real-world driving. There are a range of factors that contribute – for example, manufacturers can bake or shave the car’s tyres prior to the test to reduce friction, leave out heavy equipment such as car stereos and make sure energy-hungry technologies like air conditioning are switched off. Though this might seem like vehicle manufacturers bending the rules, all of these measures are permitted under the current testing procedure.

With the help of vehicle testing experts, the ICCT estimated the impact of each of these factors and how they combined together to create the emissions gap (see chart). The results came out remarkably close to those measured from the database of real drivers, with the gap growing from around 25% in 2010 to around 35% in 2014. Having validated the impact of each of these factors, the ICCT were then able to test out a few scenarios for future vehicle testing procedures. 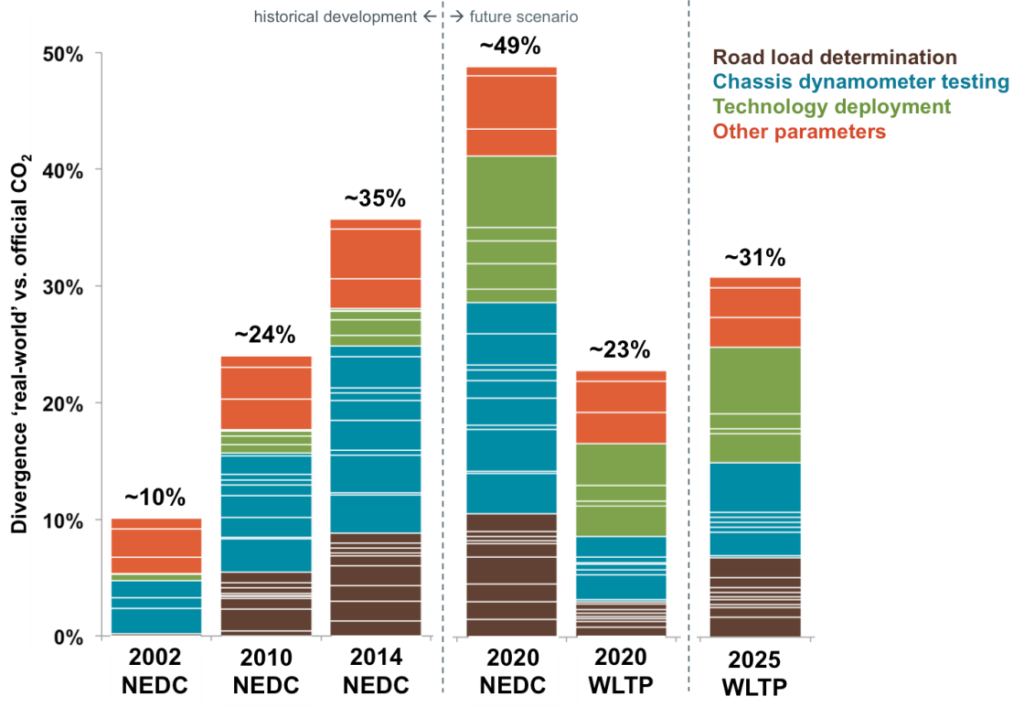 First of all, they looked at how much the emissions gap could grow by 2020 if the introduction of the WLTP were delayed. They estimated the gap could reach nearly 50%, partly due to the increasing share of plug-in hybrid vehicles, which are treated over-optimistically on the NEDC. Next, they estimated that the introduction of the WLTP would roughly halve the gap as it clamps down on many of the flexibilities currently allowed to manufacturers. However, they also conclude that there is scope for the emissions gap to widen again, to about 30% by 2025, as manufacturers work out new flexibilities allowed within the rules of the new test.

Solutions to this problem exist:  the introduction of ‘on-road’ and ‘in-use’ conformity testing. That means vehicles could be randomly selected by the authorities after purchase to be tested, both in the lab and on the road, using a portable emissions measurement system (PEMS). On-road testing is already being introduced for air pollutant emissions in the EU in 2017 and after-purchase testing is already being used by the Environmental Protection Agency (EPA) in the United States. The ICCT estimates that the combined use of these testing procedures to regulate CO2 car and van emissions could reduce the emissions gap to 8%, potentially saving 7MtCO2 in 2030, equivalent to taking over 3 million cars off the road.

Meanwhile, in the real world

There are technologies available to reduce vehicle emissions in the real world and vehicle emissions targets should help to bring such technologies into the market. However, this new report suggests that if targets are not based on effective testing procedures then there are limited incentives to introduce them.

The WLTP will provide a major improvement in real world emissions but a further move towards independent in-use and on-road testing is needed to close the gap and ensure it doesn’t grow again. Previous experience suggests that it will take several years to introduce another new testing scheme and this may not be possible before new EU targets are introduced. Therefore, future CO2 targets defined using WLTP need to be sufficiently ambitious to ensure genuine real-world emission reductions.

Efforts to reduce the gap will benefit motorists as well as governments wanting to ensure that emissions reduction targets are met. Given these benefits, regulators and the industry should continue to push for the introduction of the WLTP as currently planned in 2017, while also turning their attention towards an improved testing procedure based on real driving emissions.