At present, there remains the potential for a range of future climate outcomes for the UK. Typical studies look at the most likely part of this range and generally put much less focus on the extremes. This is sensible but there’s also every merit in looking seriously at extreme high and low climate change projections (collectively known as H++ scenarios). H++ scenarios are thought highly unlikely to occur, but are often associated with very high levels of impact. They can be used to test how well adaptation plans would cope if the impacts of climate change turn out to be more severe than we anticipate. Their value is in helping people to consider the consequences if such extreme scenarios begin to unfold and what steps might be justified now, or in the future, in response.

A new report for the Adaptation Sub-Committee (ASC) prepared by the Met Office, University of Reading and Centre for Ecology and Hydrology has developed a series of H++ scenarios for the UK, for example for high and low river flows, droughts and wind storms. To help inform the Committee’s forthcoming UK Climate Change Risk Assessment Evidence Report, the authors drew upon a wide range of data sources including but not limited to: historical observations, geological records, global climate models, and evidence from the Met Office and other climate research centres. This approach combines evidence of known climate extremes through history with the latest climate modelling and expert judgement.

The H++ climate change scenarios generally fall outside the ‘likely’ range given by the 2009 UK climate change projections (UKCP09, see Figure 1 below). It’s not possible to say exactly how improbable each H++ scenario is, though the scenarios tend to reside in the extreme upper or lower tail-ends of the probability distribution curve. 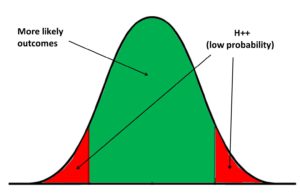 In order to assess whether we are doing enough to adapt to climate change, it is important for decision-makers to understand the full range of possibilities the UK may face.

The Thames Estuary 2100 Plan is just one example of where H++ scenarios have already influenced decision-making. The project used H++ sea level rise and storm surge scenarios to help engineers think about flexible adaptation strategies. As a result, they were able to test the robustness of long-term plans to protect London from any plausible increase in coastal flood risk up to 2100.

However, climate change adaptation plans and strategies don’t have to fully mitigate the risks of H++ climate change scenarios. Whether or not it is worth taking steps to ensure full resilience to H++ type scenarios depends on the additional cost involved and the appetite for risk. For example, the Thames Estuary plan identified a number of decision points or triggers – based on changes in the observed climate – that would signal that further and potentially costly action to upgrade defences may be necessary. This means the more expensive aspects of the plan have been fully considered but, for now, can be left until specific sea level rise or other thresholds are broken.

One of the new H++ scenarios relates to high summer temperatures. The 2009 UK climate change projections, UKCP09, suggest that under a high emission scenario mean daily maximum summer temperatures for most of England and Wales are very unlikely to increase by more than 10oC by the 2080s (i.e. from 14-22oC to 22-32oC) . The H++ scenario involves mean daily maximum temperatures of 30-34oC and extreme hot days in England as high as 48oC cannot be ruled out. As the ASC reported in its first statutory progress report to Parliament in June, homes in England already routinely overheat in summer and there are as yet no policies that promote passive cooling measures in new or existing housing. This H++ scenario makes clear that the number of hot days per year needs to be monitored, and that policy-makers may wish to consider what the national Heatwave Plan might need to be in these circumstances.

A good example of the extent to which H++ scenarios can differ from more likely outcomes is the scenario for cold snaps. UKCP09 suggests that with future warming, cold winters and cold days in the UK are likely to be less severe, occur less frequently, and last for a shorter period of time than is currently the case. However, an H++ scenario has been constructed involving an abrupt slowdown of the Atlantic Meridional Overturning Circulation (AMOC) and reductions in solar output. This plausible scenario, though highly unlikely at least this century, would result in UK winters becoming significantly colder despite the general warming trend elsewhere. Average UK winter temperatures would fall from around +3oC currently to -5°C, with the coldest days on average reaching around -14oC (record cold days would be colder still). These kinds of temperatures are similar to those of 1450 to 1850 AD, a period known as ‘The Little Ice Age’.

It’s important to read the report in full to understand the range of H++ climate change scenarios which have been developed, and importantly the assumptions and caveats which accompany them. H++ climate change scenarios (and the very specific conditions under which they occur) serve to highlight the importance of closely monitoring the climate to understand trends or rates of change. The Met Office plan to publish the latest climate observations for the UK every year, with the first such assessment (up to 2014) published in September. H++ type scenarios must also always be viewed against the backdrop of likely long-term changes, which for the UK involves a warming of several degrees over the next few decades, increases in winter rainfall and heavier rain storms throughout the year.