Between now and the end of June the “fifth carbon budget” must be written into law by Parliament. The budget will set the cap on UK emissions for the period 2028-2032. By law it must be legislated within the next three months but, like all budgets, its content is subject to discussion and debate. The legislated budget must take into account the advice of the Committee on Climate Change, the views of governments in Scotland, Wales and Northern Ireland and the criteria in the Climate Change Act. Here we recap some of the Committee’s advice, which was delivered to Parliament and published in November 2015.

The Committee recommended that the budget be set to require a 57% reduction in emissions from 1990 to 2030. That represents steady ongoing progress towards the UK’s long-term legal requirement to reduce emissions by at least 80% on 1990 levels by 2050. It builds on the 36% reduction already achieved by 2014 and the 52% reduction by 2025 already committed to under the existing four carbon budgets. The 57% proposal is the natural next step (see Figure 1 below).

The basic premise behind the Committee’s advice is that the budget should follow the lowest cost path to the long-term target. That lowest cost path is likely to involve steady action, avoid stop-start investment and ensure sufficient lead time for making more difficult changes. That has been the clear message from the Committee’s extensive discussions with businesses and other stakeholders. It is also borne out by the analytical evidence set out in the Committee’s reports.

By following that steady-action path, the Committee’s recommended budget best satisfies the multiple criteria, including affordability, competitiveness and security of supply, laid out in the Climate Change Act.

A lower level of ambition could imply that the UK was doing nothing at all in the fifth budget period for around two-thirds of the sources of emissions in the economy:

A less ambitious fifth budget would therefore mean either a back-tracking on existing commitments (i.e. the fourth carbon budget) or a failure to progress towards 2050. Such a stop-start approach would store up bigger costs for the future, and would run counter to the recent Paris Agreement, which called for action to increase.

Meeting the budget will not be easy or costless. There are some tough challenges, not least in reducing emissions from heating our homes and driving our cars. The CCC’s advice discusses those challenges in detail, and the associated costs. As Lord Deben recently said to the Energy and Climate Change Select Committee: “If the question is tough, the answer is tough.” Those challenges cannot be put off any longer.

With sufficient preparation and effective policy the challenges can be met,  bringing with them the wider benefits of cleaner air, better quality housing and a more resilient economy. Emissions from cars need to fall at around 5% per year, while EU efficiency targets for new cars already require a 5% improvement each year to 2020 and electric vehicles are showing increasing promise. The Committee’s scenarios involve around 2.5 million heat pumps in homes by 2030, which could be deployed across the expected 8 million homes that are either new or do not have access to mains gas. If little progress is made in these areas by 2030, the 2050 commitment will be very hard to fulfil without burdensome cost, given that new cars and new heating systems last for 10-20 years or more.

Figure 1: The recommended fifth carbon budget would continue emissions reduction on the path to the UK’s 2050 target. Click thumbnail for chart sources and notes. 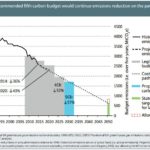