Last week the Government agreed to set the fifth carbon budget at the level recommended by the Committee on Climate Change. Today, for the first time, we are pleased to release a detailed set of data from the analysis that underpinned our advice.

The Committee recommended a 57% reduction in UK emissions from 2028-2032 on 1990 levels. The dataset we are publishing today describes one way in which this could be met. It is the ‘Central’ scenario in our fifth carbon budget report, which was our best estimate of the least cost path to the UK’s 2050 target (to reduce emissions by at least 80% on 1990 levels) while balancing other Government aims (such as keeping businesses competitive, and providing secure and affordable energy).

There are of course many uncertainties in predicting the future, and there are other ways to meet the budget. We discuss these in detail in our sectoral scenarios report. But even accounting for these uncertainties we think the budget is achievable. Many of the recommendations in our annual progress reports to Parliament focus on ensuring the UK can adjust plans as we learn more.

At the Committee on Climate Change we make efforts to engage widely and share the evidence on which we base our advice. We publish all our reports, technical annexes and supporting research. But this is the first time we have released a detailed spreadsheet of scenario data.

The dataset is freely available here. It contains the following information for each sector of the UK economy, covering the period 2015-2035:

Here are just a few examples of the kind of information available:

Emissions by sector of the UK economy: 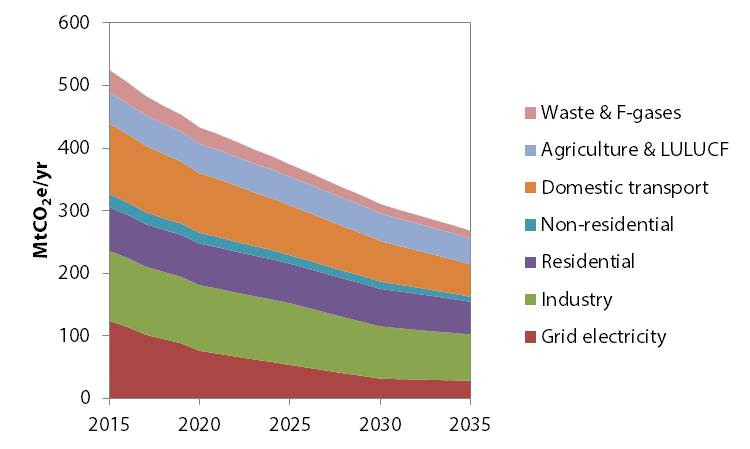 Emissions from grid electricity generation fall fastest in our Central scenario, with a big reduction from transport too. Other sectors make more gradual progress over the next few decades, especially industry and agriculture.

Changes in fuel use: 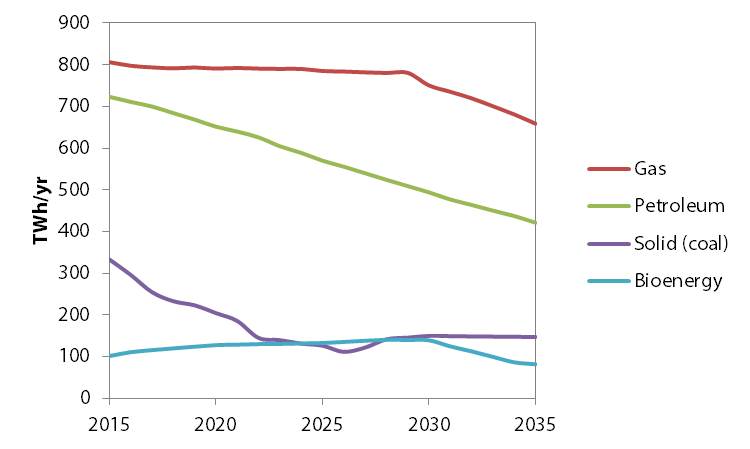 UK consumption of all fossil fuels falls in our Central scenario. Some coal is still used to generate power beyond 2025 in this scenario because it is coupled to Carbon Capture and Storage (CCS). Without CCS, fossil fuel consumption will have to be lower. Bioenergy is used in various sectors, limited to the level of sustainable supply we estimated in our 2011 Bioenergy Review.

Electricity demand for vehicles and heating:

We project a move towards electrification of both transport and heating. For instance, electric cars and vans make up about 60% of new sales by 2030 in our Central scenario. This will put extra demand on the electricity sector (left) but it is important to put this in context. Total electricity demand is expected to rise in the Baseline anyway (right), and the extra demand from heat and transport in the Central scenario (at least to 2035) is more than offset on an annual, national basis by efficiency savings from low-carbon measures across the economy.

How to use the data

Before using the data there are some things to be aware of, so do start with the README tab included in the spreadsheet. Importantly, this is a scenario and not a forecast. Delivering the changes required will clearly require further policy from Government to support actions from individuals and businesses.

This scenario data is intended to be a resource for anyone interested in the transition to a low-carbon economy. By making our analysis available in this way we hope to enhance public discussions and ensure our scenarios continue to benefit from wide scrutiny.