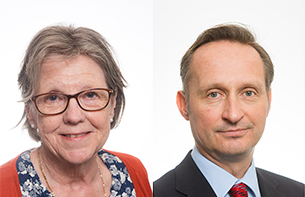 The Environment Secretary and Devolved Administrations have appointed Professor Georgina Mace and Professor Michael Davies to the Adaptation Sub-Committee.

The appointments have been made in accordance with the Ministerial Governance Code for Public Appointments. Their appointments will run from 31 January 2018 until 1 February 2021.

Georgina Mace DBE FRS is Professor of Biodiversity and Ecosystems and Director of the UCL Centre for Biodiversity and Environment Research (CBER). Her first degree was in Zoology and she has a PhD in evolutionary ecology. Her research interests are in measuring the trends and consequences of biodiversity loss and ecosystem change. She led the scientific work behind the criteria used in IUCN’s Red List of threatened species (2000), was responsible for biodiversity elements in the Millennium Ecosystem Assessment (2005), and the methodology used in the UK National Ecosystem Assessment (2011). She has been President of the British Ecological Society (2011-2013), President of the Society for Conservation Biology (2007-2009) and Chair of the DIVERSITAS global environmental change program (2011-2014). She was the winner of the 2007 International Cosmos Prize and the 2016 Heineken Prize for Environmental Science. Currently she is a member of the UK Government’s Natural Capital Committee, and a member of the Natural Environment Research Council.

Professor Mike Davies is Professor of Building Physics and Environment at the UCL Institute for Environmental Design and Engineering (IEDE). For over a decade he has led an extensive programme of research, founded on close collaboration with researchers from health and other disciplines, which has sought to understand the complex relationship between the built environment and human well-being. Much of this has been developed through close partnership with Paul Wilkinson, Professor of Environmental Epidemiology at the London School of Hygiene & Tropical Medicine.

Through such transdisciplinary research, a highly productive, multi-skilled team has been developed which has sought innovation and stakeholder participation in responding to the world’s urban health challenges. The team has pioneered methodological developments, specifically in the modelling of health impacts and in the application of system dynamics approaches to the co-generation of research in this field. This has helped articulate the multiple underpinning connections and opportunities for healthy sustainable development.