How much will global efforts to reduce greenhouse gas emissions affect the need to adapt to climate impacts in the UK? Kathryn Brown, the CCC’s Head of Adaptation, takes a look at the evidence.

One of the key questions that people ask about climate change is “does meeting our Net Zero target mean we can forget about adaptation?” or, to put it another way, “how much more climate change is inevitable?” It’s a good question. We need to understand the answer to it to know just how much climate change we need to prepare for through adaptation. And part of understanding this is working out how much can be avoided through reducing greenhouse gases globally – or mitigation.

The level of climate change we can expect is determined by:

If we look at the latest science from the Intergovernmental Panel on Climate Change (IPCC) and the UK’s Met Office, we can begin to put some bounds around the inevitable amount of future change. We have published these estimates in the table below. 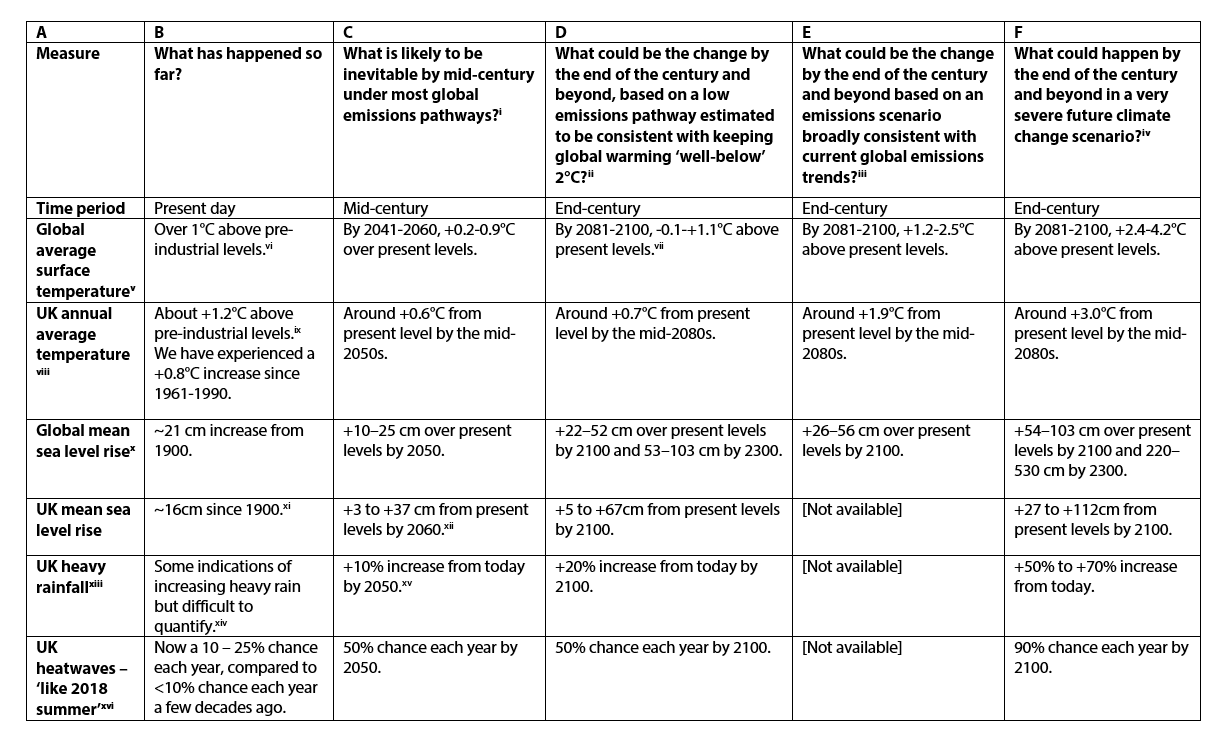 Three messages emerge when we look at the results:

What does all this mean?

It means that we have to adapt, whatever happens with UK or global emissions in the future. It also means that the success or otherwise of global efforts to reduce emissions will have a profound impact on the UK’s climate in the second half of this century. And finally, it is clear that mitigation and adaptation together are needed to address the climate challenge. Neither on its own will solve the problem.

[i] We use largely use the RCP2.6 scenario in this column that has an approximately 66% chance of keeping warming to below 2°C. Future global emissions scenarios with higher levels of emissions show at least this level of change by 2050. Slightly lower levels of change are seen in the more ambitious scenarios presented in the IPCC Special Report on Global Warming of 1.5°C.

[ii] This column is largely based on the RCP2.6 scenario that has an approximately 66% chance of keeping warming to below 2°C. This scenario sees global emissions fall rapidly to reach net-zero before 2100, with net-removals of CO2 in the final few decades of the century.

[iii] We use the RCP6.0 scenario to approximate this, which is a pathway for future global GHG emissions sees radiative forcing from greenhouse gases and other human activities rise to 6 Wm-2 by 2100. In this scenario emissions continue to steadily rise over the rest of the century.

[iv] This column is largely based on the RCP8.5 scenario, which represents a considerable re-carbonisation of the global economy. Emissions would be required to grow to about three times their current levels by 2100 to achieve a forcing level of 8.5Wm-2 by 2100.

[v] Future projections are taken from the RCP scenarios as simulated by the CMIP5 models. The present level is defined as the 2008-2017 decade, and the range given is the 5th-95th percentile across the CMIP5 models (one ensemble member per model).

[vii] This scenario achieves net-removal of CO2 from the air before 2100, so global temperature may begin to decline before the end of the century in this scenario, with some probability that temperatures could be returned to a lower level than today by 2100. More ambitious scenarios were assessed by the IPCC Special Report on 1.5°C that have greater rates of CO2 removal and lower ranges of 2100 temperature.

[ix] This is an observed change reported in the UKCP18 Science Overview Report. Present levels is defined as 2008 – 2017. See page 11. UK human-induced warming relative to pre-industrial is estimated using the method of Hawkins et al (2020).

[xiii] Heavy rainfall is here defined as the mean of the wettest 5% in the distribution of hourly rainfall over winter.

[xv] This is very metric dependent, but a broad estimation is provided in Sayers et al. (2015) Projections of future flood risk for the UK – Appendix C, page 21.Future projections are taken from a scenario expected to reach a peak warming around 2°C for the 2050s and the 2080s, and for a ‘high++’ scenario for the 2080s projections under a high carbon future.