Piers Forster, IPCC coordinating lead author and member of the Climate Change Committee, reflects on what we’ve learnt from the Sixth Assessment Report.

As we enter this critical period of global climate diplomacy, at the UN General Assembly and COP26, negotiations will be framed by the latest report from the IPCC, the UN’s body for assessing the science of climate change. It is difficult to underplay its importance. It confirms that the science underpinning greenhouse gas emission reductions targets is robust, and further underlines why emissions reductions must be accompanied by adaptation to inevitable further climate change.

What is the IPCC report?

The report published on 9 August is the first part of a trilogy of reports that form the IPCC’s 6th Assessment. IPCC reports are commissioned by the world’s 195 national governments and the summary is agreed unanimously, line-by-line, by those governments. The report’s results are therefore an agreed basis for the COP26 negotiations and set the tone for the next phase of climate action globally. IPCC reports synthesise the state of knowledge to help inform effective policy decisions but do not make recommendations themselves.

This IPCC report reveals the huge advance in climate science over the last 8 years. There are now thousands of autonomous robots measuring changes deep within our oceans, colleagues have developed new theories and probed details of processes within the climate system using sophisticated field campaigns and novel simulations. This means that a huge amount of evidence can be brought together to make more accurate projections of global change and to quantify the unique risks that different regions of the world face with unprecedented granularity.

What does the IPCC report show?

The IPCC’s Special Report on warming of 1.5°C, published in 2018, was a key piece of evidence for our recommendation to the UK government for a 2050 Net Zero greenhouse gas emission target. The latest IPCC assessment report provides a comprehensive update to the science in the Special Report including: better understanding of how the Earth’s climate responds to emissions, an up-to-date estimate of how close global temperatures are to 1.5°C of warming above pre-industrial levels and the remaining volume of global cumulative carbon dioxide that could be emitted to be consistent with keeping global warming below any particular threshold (such as the 1.5°C and 2°C levels referred to in the Paris Agreement). Most importantly, thanks to a much-improved estimate of climate sensitivity, the report is able to place a tighter constraint on the possible climate futures for a given emissions pathway. That means we can make more accurate predictions when it comes to thinking about the types of changes we may need to adapt to in future.

The IPCC report is unequivocal that past emissions of greenhouse gases have led to the unprecedented rates of climate change (including heatwaves and intense rainfall) that we are seeing around the world today. It further details how we are already locked into centuries of sea-level rise and that each tonne of greenhouse gases we emit will further increase climate-related hazards around the world.

The good news is that the report makes it clear that we can stop many of these extremes getting worse by stabilising temperatures. The bad news is that the frequency of unprecedented extreme weather will continue to increase until we limit further warming by achieving global Net Zero carbon dioxide emissions. For example, the figure below shows that a heatwave that used to occur once in every 50 years, can be expected to occur every third year with 2°C of global warming above pre-industrial levels and that it will be considerably more intense when it does. 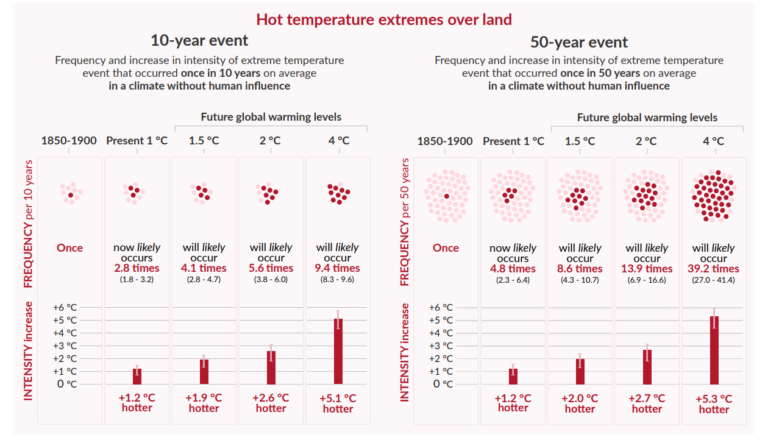 The report also details the risks from sudden abrupt changes to the climate, the collapse of the gulf stream being the most important to consider for the UK. These low-likelihood yet high-impact risks were recently considered as part of the UK’s third Independent Assessment of UK Climate Risk. Evidence points towards the likelihood of such a collapse being relatively low  this century, especially if we are able to limit warming to lower levels. If a collapse were to occur, it could destabilise UK weather patterns in unknown ways, so such events need careful monitoring but remain difficult to plan for.

The IPCC’s report assesses and summarises nearly a decade of new scientific understanding. This same scientific understanding has underpinned our advice to the UK Government on setting emissions targets and adapting to climate change. The IPCC report confirms that reaching Net Zero carbon dioxide (CO2) emissions globally is expected to stop or even slightly decline its warming influence as forests absorb the extra CO2 likely to be released by permafrost.

The report also shows that if we can go further than Net Zero CO2, to reach Net Zero greenhouse gases globally, we will be able to slowly reverse future temperature increases. This same scientific understanding was summarised in our Net Zero and Sixth Carbon Budget reports, which showed that reaching UK Net Zero greenhouse gas emissions by 2050 would likely see the UK’s contribution to global temperature peak prior to 2050 and then start to decline, consistent with the IPCC’s conclusions. New scientific investigations also show that carbon dioxide removal is expected to work – in that it is effective at removing CO2 from the atmosphere and reducing ocean acidification.

The IPCC’s report also provides updated estimates of total future global emissions consistent with keeping warming to the levels mentioned in the Paris Agreement. These ‘remaining carbon budgets’ are more certain when compared to those set out in the Special Report on 1.5°C (consistent with more certainty in the plausible ranges for the Earth’s climate sensitivity in this assessment). This latest report also contains adjustments to integrate hard-to-model, slow-acting Earth system feedbacks (such as permafrost thawing). Our Sixth Carbon Budget report previously considered what ‘narrowed’ climate sensitivity ranges and additional Earth System feedbacks would mean for projected warming under global emissions pathways consistent with a central estimate of keeping warming to around 1.5C above pre-industrial levels, finding only small effects on the median expected warming from these pathways.

The findings of the IPPC’s latest report are therefore entirely consistent with the scientific basis for the UK’s Net Zero target and Sixth Carbon Budget. Overall, the IPCC concludes that if we can achieve 3-4% annual reductions in greenhouse emissions globally we still have a good chance of limiting warming to 1.5°C, with the global emission reduction estimates laid out in Chapter 7 of the CCC’s Sixth Carbon Budget to meet a 1.5°C target with 50% likelihood remaining unchanged. Similarly, despite narrowed climate sensitivity estimates, the IPCC’s and our own work demonstrate that it isn’t yet possible to rule out warming exceeding 4°C above pre-industrial levels by the end of the century under the current level of ambition for reducing global emissions. This means that it is still sensible to consider these high levels of warming as part of a comprehensive climate change risk assessment, such as the one we published in June.

Near term action and UK leadership

Overall, the latest IPCC report strengthens the assessment set out in the IPCC’s Special Report on 1.5°C that reaching Net Zero emissions by the middle of the century would limit global warming close to 1.5°C if coupled with sufficiently ambitious emissions reductions over the coming decade. So, focus can move to delivering on these targets. The IPCC report confirms that greenhouse gas reductions in the next 10 years, and reducing carbon dioxide and methane emissions especially, can help the world avoid unprecedented warming rates and improve air quality. This sends a clear message to Governments meeting at COP26 to deliver these urgent changes.

During the two-week online government approval process for the IPCC report, the UK government delegation earned respect from nations and authors alike for their diplomacy, organisation and leadership, helping to steer the report towards a set of strong, clear messages. They now pass the baton to the COP26 negotiating team, who have the vital job of securing ambitious climate action.