Climate change is a global problem which needs a global response. The 2015 Paris Agreement frames that response by setting a long-term global temperature goal and requiring bottom-up Nationally-Determined contributions from each country that reflect their responsibilities and capabilities. Together, these commitments should deliver the long-term temperature goal – keeping global warming to ‘well-below’ 2°C above pre-industrial levels, and ‘pursuing efforts’ to keep it below 1.5°C.

It is the responsibility of all countries to take coordinated action to reduce emissions and to adapt to climate change. The world is now experiencing the impacts of a rapidly heating climate and further warming is inevitable, even on the most ambitious pathways for the reduction of global greenhouse gas emissions. Adaptation actions are needed to reduce climate impacts on the most vulnerable and emissions reductions are essential to meet the long-term temperature goal. 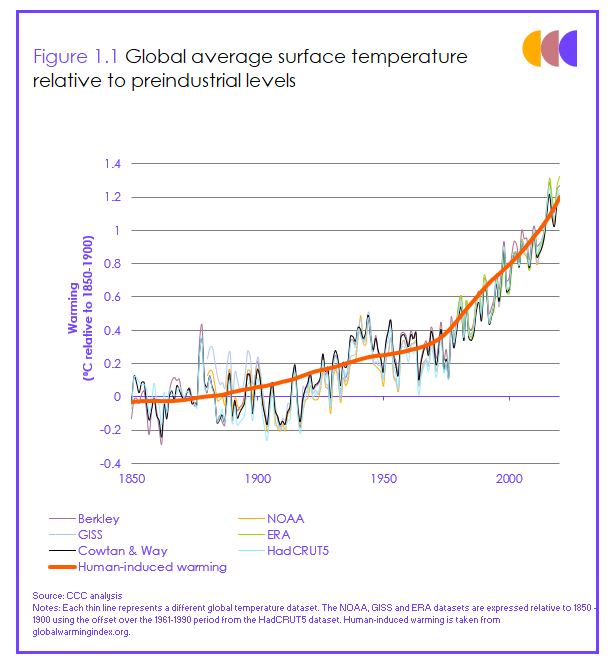 Global near-term emissions reductions are critical; the rise in temperature globally will depend on the cumulative amount of emissions emitted. If the world is to deliver on the Paris Agreement, there is a requirement for action now, alongside each nation’s overall aim of reaching Net Zero. The UK Climate Change Committee (CCC) has advised the UK Government on reducing its greenhouse gas emissions and adapting to climate change for over a decade, as the independent expert adviser created under the 2008 UK Climate Change Act. Since 1990, the UK has achieved the largest reductions in greenhouse gas emissions of any G20 economy (40%) while continuing to grow the economy GDP (78% from 1990-2019), and has enjoyed strengthened business, political and public support for a transparent and evidence-based approach to climate policy.

In 2021, the Climate Change Committee published its analysis of the pathway to Net Zero, a plan for a fully decarbonised UK. It is a detailed depiction of the choices before the UK in reaching the goal of Net Zero greenhouse gases by 2050 at the latest, with an accompanying similarly ambitious 2030 pledge, to reduce emissions by at least 68% from 1990, as part of the UK’s Nationally Determined Contribution (NDC) to the UN process.

Our recommended budget – legislated by Parliament in June 2021 – achieves well over half of the required emissions reduction to 2050 in the next 15 years and our analysis in the report shows this is feasible, provided effective policies are introduced across the economy without delay. We estimate net costs of meeting the budget to be low, equivalent to less than 1% of GDP. Delivering Net Zero will be challenging but can also deliver huge benefits, creating new industrial opportunities and ensuring wider gains for the nation’s health and for nature.

Government has now responded through the Net Zero Strategy, which sets out the Government’s plans for how it will meet the legislated targets. This is well aligned to our recommendations in terms of sectoral ambition and represents a step forward in the challenging task of translating this ambition into a set of robust policies.

But Net Zero alone is not enough. Our independent assessment of climate risk published in 2021 showed reducing climate impacts requires both emissions reduction and adaptation. The UK will face significant further changes in climate to 2050 and beyond, even if the world is on a Paris-aligned emissions trajectory. By 2050 the heatwave experienced in the summer of 2018 will be a typical summer, summer rainfall could fall by as much as 24% and winter rainfall could increase by as much as 16%. These changes will impact our well-being, the natural environment and the economy.

Adaptation can lead to large-scale reductions in damages from climate risks as well as providing a range of co-benefits to health, to the natural environment and to the economy. Both the size of current and future risks, and the urgency of action, has increased compared to five years ago. The future costs from climate change over the century are estimated to be higher now than they were five or ten years ago. The longer action is delayed, the higher the costs the Government will face as the insurer of last resort. The costs of adaptation will also increase.

Climate change has global consequences. In order for the world to limit the warming of the planet, action is required across the world. It is the responsibility of all countries to take coordinated action to reduce emissions and to adapt to climate change.

COP’ stands for Conference of the Parties and is attended by countries that have signed the United Nations Framework Convention on Climate Change (UNFCCC) – a treaty agreed in 1994. COP26 was the 26th meeting, held in Glasgow in November 2021.