Climate change has global consequences. In order for the world to limit the warming of the planet, action is required across the world. It is the responsibility of all countries to take coordinated action to reduce emissions and to adapt to climate change.

The UNFCCC was created in 1992 as the main forum for international action on climate change. 195 countries have joined the international agreement (known as a convention). Negotiations focus on four key areas:

The UN Framework Convention on Climate Change (UNFCCC) commits all signatory nations to formulate, implement, publish and update measures to prepare for the impacts of climate change, known as ‘adaptation’. It also commits countries to cooperate on adaptation and provides a variety of support mechanisms for the implementation of adaptation measures in developing countries. In 2010, the Cancun Adaptation Framework was adopted and it was agreed that adaptation must be given the same priority as mitigation. The framework calls for further action on adaptation including reducing vulnerability and increasing resilience to climate change in developing countries.

The Paris Agreement is the globally agreed framework for tackling climate change, created at the 21st Conference of Parties (COP21) to the United Nations Framework Convention on Climate Change (UNFCCC) in 2015 and has been in force since 2016. It has been ratified by 188 countries representing around 80% of current global greenhouse gas emissions. The Paris Agreement sets a long-term temperature target of keeping global warming ‘well-below’ 2°C above pre-industrial levels, and ‘pursuing efforts’ to keep it below 1.5°C. The Paris Agreement also defines a global goal on adaptation to enhance adaptive capacity and resilience and to reduce vulnerability. The UK’s commitments under the Paris Agreement, and the context of the latest international science from the Intergovernmental Panel on Climate Change (IPCC) underpins all of the CCC’s advice. 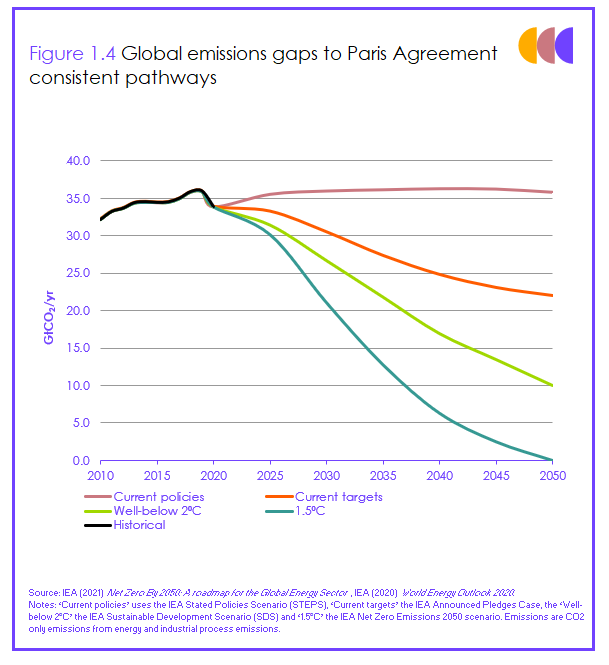