This is a letter from CCC Chairman, Lord Deben, to the Minister of State for Energy and Clean Growth, Claire Perry MP, about the carry-forward of ‘surplus emissions’ from the UK’s second carbon budget (2013-2017).

The second carbon budget was met with emissions of 384 MtCO2e (14%) below the level of the budget. The letter concludes that any carry-forward of the surplus would undermine the integrity of the UK’s framework for emissions reduction under the Climate Change Act, because:

The letter states that the aim should be to meet and outperform carbon budgets through actions to reduce emissions, rather than relying on statistical revisions which can go both up and down. 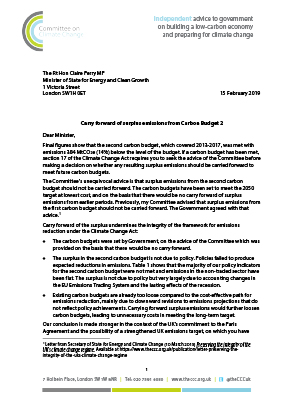