This is a letter from Lord Deben, Chairman of the Committee on Climate Change, and Baroness Brown, Chair of the CCC’s Adaptation Committee, to Roseanna Cunningham MSP, Cabinet Secretary for Environment, Climate Change and Land Reform. The letter is in response to a formal request for advice on a ‘green recovery for Scotland’. As the Scottish Government considers its approach to rebuilding after the COVID-19 crisis, the letter sets out the Committee’s recommendations as to how effective climate policy can and should play a part in the recovery. Reducing greenhouse gas emissions and adapting to climate change should be integral to Scotland’s overall approach, the CCC says.

The Committee agrees with the Scottish Government’s decision to delay its Climate Change Plan, and welcomes steps to reframe that Plan in the context of a ‘green pathway’ to aid an economic recovery that is in line with Scotland’s statutory net-zero targets. An updated Plan, in conjunction with Scotland’s second Climate Change Adaptation Programme, can help to rebuild Scotland with a stronger economy and increased resilience.

The CCC recommends that the Scottish Government, in partnership with Westminster, prioritises actions according to six principles for a resilient recovery: 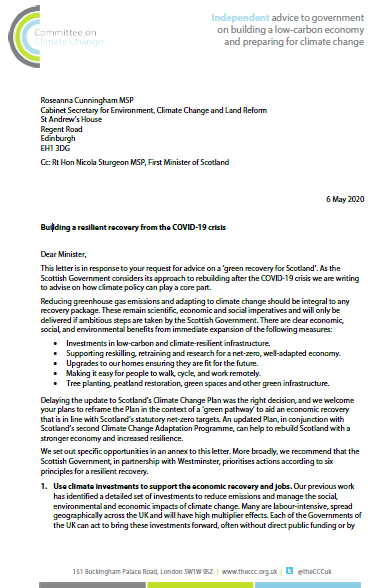