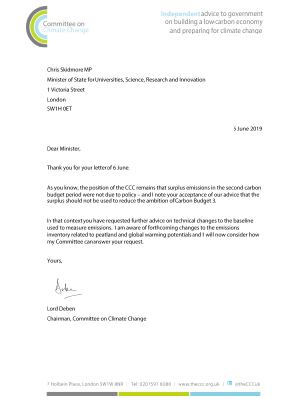 This is a letter from CCC Chairman, Lord Deben, to Chris Skidmore MP, Interim Minister of State for Energy and Clean Growth, about the carry-forward of surplus emissions from the second carbon budget (2013-2017).

It was sent in response to a letter from Chris Skidmore to Lord Deben setting out the Government’s position on the same issue. The Committee wrote to the Department for Business, Energy and Industrial Strategy (BEIS) to provide its advice on the matter in February 2019.