Letter from Chris Stark, Chief Executive of the Climate Change Committee, to Kevin Hegarty, Director of Clean Growth and Climate Action  at the Northern Ireland Executive about a change in the reporting practice for inclusion of the greenhouse gas emissions inventory for Northern Ireland in the annual UK-wide Progress Report to Parliament.

Each year, the greenhouse gas emissions inventory for Northern Ireland is published in the first half of June. The timing of publication is typically extremely close to our annual UK-wide Progress Report to the UK Parliament, which must be laid in the UK Parliament by the end of June.

This year, the deadline to finalise our UK-wide Progress Report is 2 June. Unfortunately, this is before the Northern Irish emissions data are expected to be published. We will not, therefore, be able to include these data in the UK Progress Report unless it is possible to have pre-release access.

Due to our concerns over quality assurance and Committee oversight, we have also concluded that, for future years, we will not include the Northern Irish emissions statistics in the UK Progress Report, unless they can be received with sufficient time for analysis. We would require earlier publication and/or pre-release access to the data for inclusion, such that we receive it no later than the third week of May. 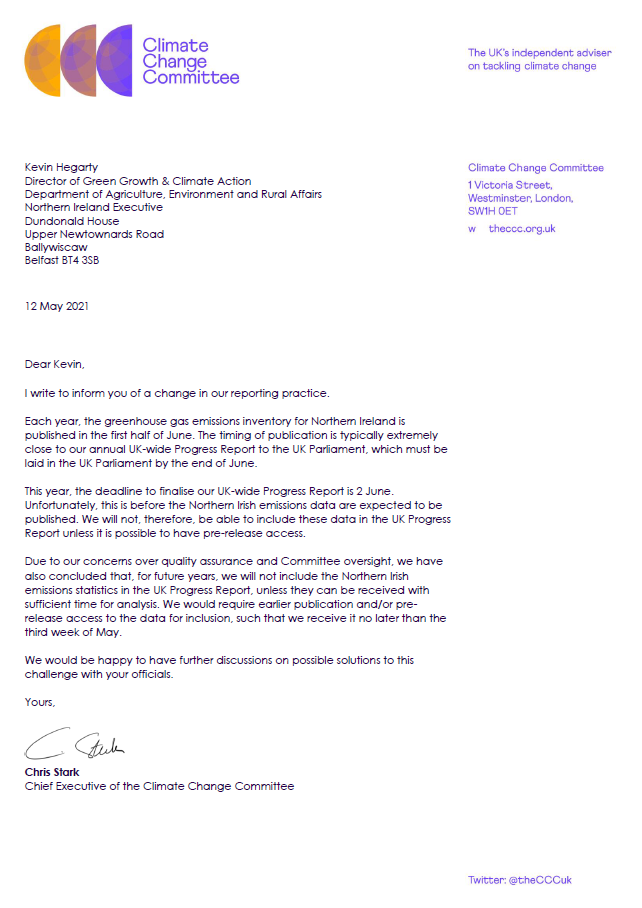