In the letter Lord Deben says: ‘We believe it is important to re-iterate that carbon budgets should be met through UK action consistent with achieving the 2050 target. The carbon budgets legislated to-date to put us on the cost-effective path to 2050 and other obligations (e.g. the EU 2020 commitments) require an actual reduction in emissions of 2% to 3% per annum in the non-traded sector. This requires that policies to reduce emissions are strengthened, not that they are avoided through loopholes.’

The Secretary of State’s response reiterates the intention to meet the 2050 target through action across the economy.

The UK’s 2050 target to reduce emissions by at least 80% relative to 1990 requires that emissions are reduced across the economy.

The carbon budgets (currently legislated to 2027) set the path towards that target. They have been set reflecting the need to reduce emissions across the economy.  They were based on the best understanding, at the time they were set, of how the UK’s emissions would be counted under the EU’s Emissions Trading System (EU ETS), the actions required in the sectors covered by the EU ETS (power generation and heavy industry) and the actions required in the rest of the economy (e.g. transport, other industry and commerce, buildings, agriculture).

Since the carbon budgets were set the actual allocation of emissions reduction under the EU  ETS has been agreed.  It differs from what was thought when the carbon budgets were set.   As a result, those original budgets no longer reflect the intent, under the Climate Change Act, to reduce emissions across the whole economy to meet the 2050 target. 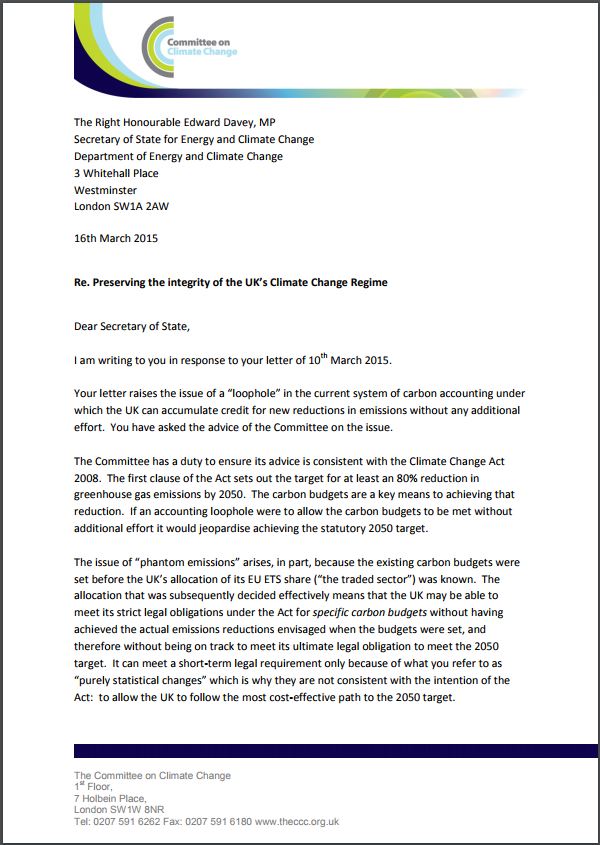