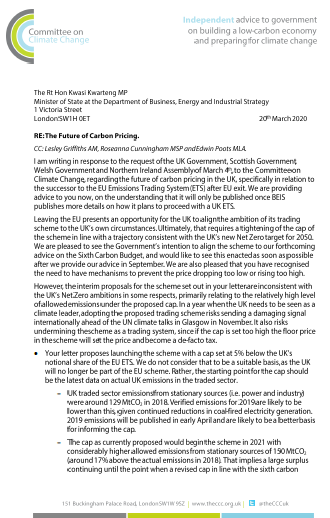 This is a letter from Lord Deben, Chairman of the Committee on Climate Change, to Rt Hon Kwasi Kwarteng MP, Minister of State at the Department of Business, Energy and Industrial Strategy.

The letter is in response to a formal request from the UK Government, Scottish Government, Welsh Government and Northern Ireland Assembly regarding the future of carbon pricing in UK, specifically in relation to the successor to the EU Emissions Trading Systems (ETS) after EU exit.

The letter states that: