This is a letter from Lord Deben, Chairman of the Climate Change Committee, to Rt Hon Anne-Maire Trevelyan MP, Minister of State for Energy, Clean Growth and Climate Change and to Robert Courts MP (Parliamentary Under Secretary of State at the Department for Transport), Julie James MS (Minister for Climate Change in the Welsh Government), Michael Matheson MSP (Cabinet Secretary for Net Zero, Energy and Transport in the Scottish Government) and Edwin Poots MLA (Agriculture, Environment and Rural Affairs Minister in the Northern Ireland Executive), providing updated advice on the level of the cap of the UK Emissions Trading Scheme (UK ETS) and advice on the interaction between the UK ETS and the Carbon Offsetting and Reduction Scheme for International Aviation (CORSIA).

The Committee is providing updated advice to Government on the level of the cap for the UK ETS, consistent with the CCC pathway to Net Zero. The advice has been updated to align emissions included in the recommendation to the correct scope of the UK ETS, now that there is clarity both on the level of the Sixth Carbon Budget and on the scope of emissions covered by the UK ETS in terms of emitting sectors, greenhouse gases and geographic coverage:

Government is consulting on the interaction between the UK ETS and CORSIA, and has recently published a response to its consultation on the monitoring, reporting and verification requirements for CORSIA: 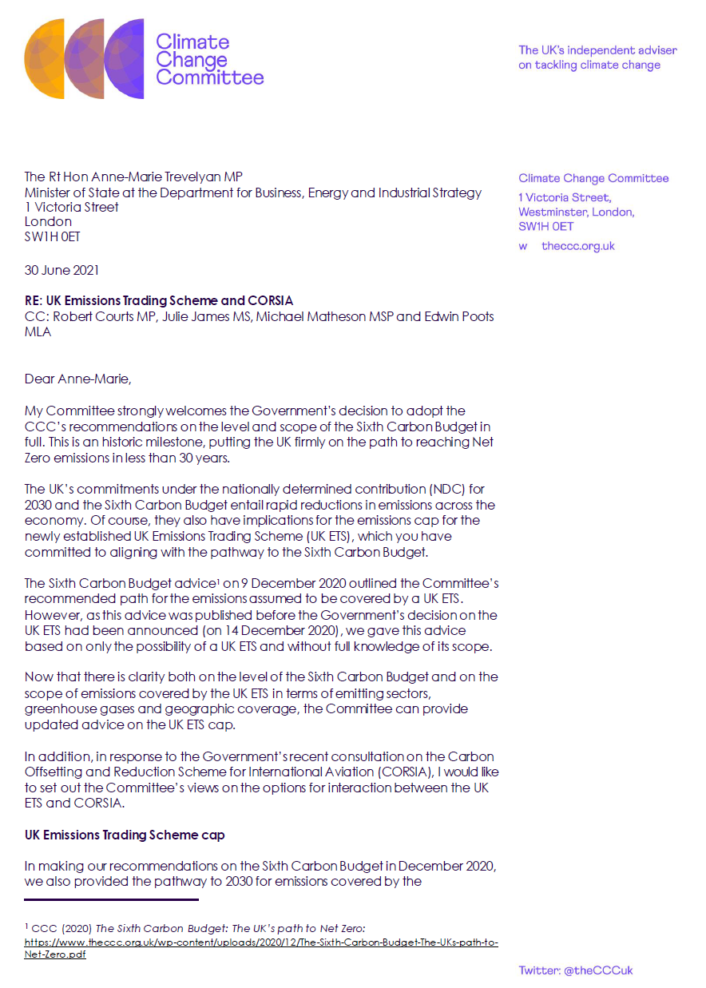