This is the CCC’s first annual progress report to Parliament. It assesses the progress that has been made by Government so far in reducing emissions and the implications of the recession and ‘credit crunch’ for meeting carbon budgets.

The report sets out the emission reduction indicators that will be used to judge progress and will provide a detailed analysis of the policies required to reduce emissions of greenhouse gases from electricity generation, from buildings and industry, heat and transport in the years up to the end of the third carbon budget period in 2022.

Lord Nicholas Stern welcomed the Committee’s report saying: “The Committee on Climate Change has produced a report which charts both the way forward in monitoring targets, emissions and policies and shows what will be required to achieve the necessary emissions reductions; it is a fine piece of work, which should be supported across the political spectrum and which will enhance the UK’s role in fostering global understanding and agreement”.

Limited numbers of the CCC’s full report were printed. The report was printed using waterless printing, 100% renewable energy and vegetable oil based inks on paper with 100% recycled content, FSC, EMAS and ISO 14001 certified.

The CCC commissioned research from a number of consultants to inform its advice on meeting carbon budgets. Consultant’s reports are listed below according to the chapter that they support and can be accessed and downloaded by clicking on the relevant link.

The data set which was used to produce the exhibits published in “Meeting carbon budgets – the need for a step change” are available to download and view by chapter below.

The Technical Appendices for each chapter of the report will be available to download shortly from this page.

A number of organisations published their reaction to the CCC’s first annual progress report to Parliament. A selection of quotes from these groups is listed below.

Friends of the Earth

Commenting on the first annual report to Parliament by the Committee on Climate Change, which calls for a step change in the pace of UK emissions and tougher policies, Friends of the Earth ‘s Executive Director, Andy Atkins said:

“The Committee is right to be concerned about Government action on climate change. The Climate Change Act is a world-class piece of legislation, but the true test is the policies put in place to deliver its goals.  Crucial strategies on fossil fuels, aviation and energy infrastructure, due out shortly, will demonstrate whether or not the Government has heeded the Committee’s warnings. These National Policy Statements must clearly set out their carbon impacts and how they will deliver on the UK’s carbon budgets – failure to do so will seriously undermine the Government’s international leadership on climate change. Developing the UK’s huge renewable energy potential and slashing energy waste will bring huge economic benefits, deliver new green jobs and put Britain at the forefront of securing a safer, cleaner future for us all.”

“This report makes an important contribution to the debate about how best to meet our carbon budgets. It highlights much of the good work already underway to reduce our carbon emissions but also identifies important areas where we could do much more.
Building on last weeks scenarios from OFGEM, as many have been saying for some time now the scale of the challenge is huge and raises real questions about how best to deliver the action that is needed to cut emissions, whilst ensuring we have security in our energy supplies, and keeping bills affordable, particularly for the most vulnerable consumers. It is a difficult balancing act and none of us should be complacent about the huge task before us.  We particularly welcome the Committee’s emphasis today on need to improve the energy efficiency of our buildings. This will be critical if we are to keep carbon emissions down, while also keeping our energy bills as low as possible.”

“This report sets the right priorities and tells us how Britain can get the energy we need for the lower carbon emissions we can afford.  There is a cost but the cost of doing nothing will be higher.  Retooling Britain’s energy supplies will need investment, new technology and new skills.  On the bright side, it means new jobs and new opportunities for British business at home and abroad.”

“This is exactly what our volunteers on the roof of Parliament have been saying today. We need a step change in politics to save the climate with less than 60 days until Copenhagen. We agree with Lord Stern when he said today that we need a cross-party consensus with all politicians committing to fighting for the next generation and not just the next election.”

In a new development, the Climate Change Committee called for four carbon capture and storage demonstration projects by 2016 to ensure that there is no role for unabated coal beyond the early 2020s.

“The committee are clear that Ed Miliband urgently needs to deal with emissions from coal. With plans for Kingsnorth shelved, Miliband now has a golden opportunity to introduce tough new standards for all power stations to ensure that Britain gets on track to become a low-carbon economy.”

Society of Motor Manufacturers and Traders

“The Committee recognises that a portfolio of technologies will deliver emissions reductions in the medium-term and that if longer-term targets are to be achieved, that incentives and an integrated approach between industry, fuel companies and government will be crucial for the uptake of electric vehicles.
“Industry, through the work of the New Automotive Innovation and Growth Team, has established a technology roadmap and researched priorities to enable widespread delivery of ultra-low carbon transport solutions”.

EEF believes the report paints a comprehensive picture of the scale of the challenges the country faces and sets ambitious plans for action. However, according to Gareth Stace, Head of Climate & Environment Policy at EEF, there remains an over reliance on large and heavy industry to deliver further reductions, despite it having already achieved significant improvement. He said:

“From insulation in homes, energy efficient products to hybrid vehicles and steel components for low-carbon energy production, manufacturing will deliver the solutions to climate change. However, the government runs the risk of undermining competitiveness of our manufacturers and the prospects of a more balanced economy if it insists that they bear much of the brunt for further action. The government must deliver on its responsibility to ensure that UK industry is able to keep up with the pace of change. It also has to ensure industry is best placed to take advantage of the opportunities available from the booming environmental goods and services markets.”

“In April the CBI published a series of roadmaps, which set out the steps needed to get the UK on track to meet our ambitious carbon reduction targets and secure our energy supply. This report echoes much of our thinking around the urgent need for a clear timetable for action on climate change. It will be the private sector that delivers the infrastructure needed to shift to a low-carbon economy. However, we have already seen cases of firms delaying investment because of uncertainty about government policy. It is up to the government to provide the right policies, and then let the market get on with delivery. We need the National Planning Statements, as well as regulatory and funding details for clean coal demonstration plants published as soon as possible, so firms can invest with confidence. Ultimately, building a low-carbon economy will require government, businesses and consumers all working together to reduce emissions.”

“We are very supportive of the Committee on Climate Change’s call for a step change in action to make our homes more energy efficient. The one single thing that that people can do to tackle climate change can be done right now; we don’t need new technology to be created or developed. And because it will also help stop energy bills from rising it makes financial sense for many people, as well as helping to create jobs.

“A long term whole house approach, allowing people to reduce energy use across the board, is essential, coupled with an area based, street by street approach now. Completing the insulation of the 19.3million lofts and cavity walls in the UK which are not yet properly insulated would help to create thousands of jobs and reduce the UK’s household energy bills by £1.2 billion a year, and every future year, at today’s energy prices.

“Whoever undertakes this activity, whether they be a local authority, energy company or builder, the consumer needs to have trust in the information they are provided and the installers in their homes. Our research shows that 72 per cent of its customers want advice on green issues from one source, like the Energy Saving Trust.”

“This report is a wake up call. All parties must act on these recommendations and ramp up the level of ambition of their climate policies in order to meet the UK’s targets.” 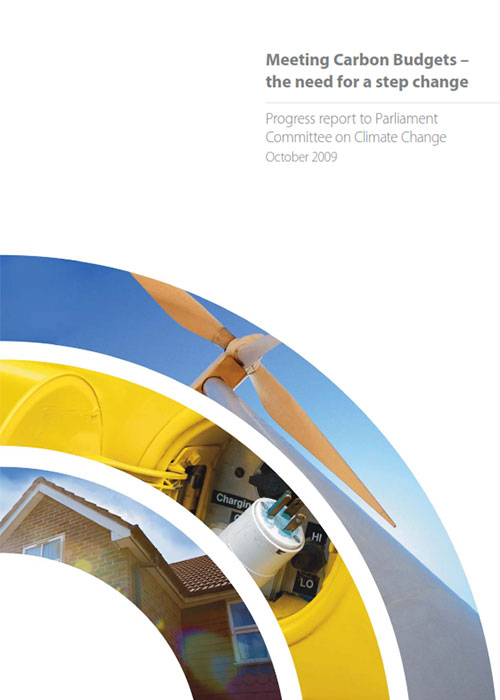