Members of the Committee on Climate Change

“Men wanted for hazardous journey. Low wages, bitter cold, long hours of complete darkness. Safe return doubtful. Honour and recognition in event of success.” This was the advert placed by Ernest Shackleton in 1914 to recruit a team of explorers for his expedition to the South Pole.

But what does Antarctic exploration look like today, and how does it affect us?

Members of the CCC recently visited the British Antarctic Survey on the outskirts of Cambridge. During a fascinating afternoon we found out about the worldwide implications of polar climate change, but also how scientists are learning some neat low-carbon tricks from such a cold environment.

Our visit started with talks about changes in ice cover over both the Arctic and Antarctic, and efforts to improve our understanding through observations and models. Particularly important is the potential for the vast Antarctic ice sheets to melt away. The West Antarctic Ice Sheet has been in the news recently, with some claiming it has already warmed past a point of no return, and it was useful to get the (more nuanced) views of BAS scientists on this.

Predicting future ice loss is especially important because of the sea level rise it entails, risking flooding in coastal areas including London and other large cities. Keeping up-to-date on these climate risks is important for the CCC because it informs the emissions reductions we need to avoid the worst risks. It also shows that there are some residual risks we will have to face, even if we achieve our climate goals. 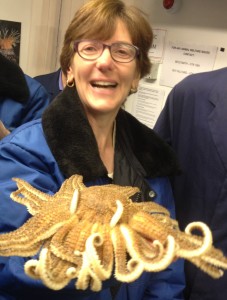 We then toured the building and got to hold some pretty unusual things, including 120,000 year-old ice and a 40-legged starfish! First up was the refrigerator where we saw ice core samples drilled from Antarctica. As snow is laid down year on year, these cores act as a time capsule of water and air bubbles. They provide some of the most compelling evidence for the large climate changes of the deep past and the associated role of carbon dioxide.

After standing in the refrigerator we put our hands in the near-freezing water of the aquarium, and held a range of Antarctic species kept there. Not only did we learn about the risks they face from global warming. We also discovered that biologists are taking inspiration from them to develop new technologies. The ways they have adapted to survive the cold have applications from washing powders to biofuel production. Getting these technologies to work at lower temperatures means less energy used in heating, and therefore lower carbon emissions.

So not only are British Antarctic Survey scientists working to understand the risks from a warming climate, but they are also helping to find solutions to mitigate the problem. Thanks for a unique and enlightening visit!