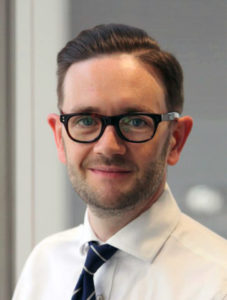 Lord Deben, Chairman of the Committee on Climate Change (CCC), has welcomed the appointment of Chris Stark, the CCC’s new Chief Executive.

Chris will start work on 16 April, taking over from Matthew Bell who stepped down last year.

Chris joins the CCC from the Scottish Government where he is currently the Director of Energy and Climate Change, leading the development of Scotland’s approach to emissions reduction and the accompanying energy system transition.

Previously, Chris headed up the Scottish Government’s central strategy team. He has widespread experience of economic policy-making and has worked in a number of Whitehall departments including HM Treasury and the former Department for Business, Innovation and Skills.

Chris will provide strategic direction to the Committee’s 30-strong secretariat and oversee the CCC’s work delivering expert advice to the UK government and the devolved administrations on reducing greenhouse gas emissions and preparing for climate change.

Lord Deben said: “I am delighted that we have found a candidate as able as Chris and warmly welcome him to his new role.

“Chris joins us at an important moment: 2018 marks the tenth anniversary of the Climate Change Act and the CCC’s tenth birthday. Over the past decade we have played an important role in advising the Government on its carbon targets, ensuring progress towards meeting them, and monitoring the UK’s progress in preparing for the impacts of climate change.

“The next ten years will be just as important as we continue to provide independent and impartial scrutiny and advice to ministers and parliamentarians on climate change; one of the most pressing issues of our time. I have no doubt that Chris will help us to rise to the challenge.”

Chris Stark said: “I’m delighted to have been chosen for this role. The role of the CCC has been instrumental in maintaining Scotland’s climate change focus in recent years, so I look forward to stepping back into the UK-wide debate. It’s a privilege to lead the organisation at this stage – ten years after its creation, with a well-earned, authoritative reputation. I’m excited to work with the Committee to extend its influence in the coming period, as some of the critical climate policy concerns are tackled in the UK.”

Lord Deben also thanked Adrian Gault, the CCC’s Acting Chief Executive, who has led the Secretariat for the past nine months, saying: “Adrian has steered us through an extremely busy period including the launch of our recent report assessing the UK Government’s Clean Growth Strategy. My sincerest thanks go to Adrian for his exemplary work over many months.”