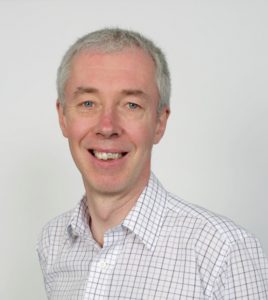 Keith Bell, Professor of electronic and electrical engineering at the University of Strathclyde, has been appointed to the Committee on Climate Change (CCC) by the UK Government and Devolved Administrations in Scotland, Wales and Northern Ireland.

Professor Bell, who takes up the position of power sector specialist on the Committee, will join the CCC for a five-year term. Keith Bell is a co-Director of the UK Energy Research Centre (UKERC) and a Chartered Engineer. In addition to teaching and being involved with energy system research in collaboration with various academic and industrial partners, he has a number of additional roles including with the Offshore Renewable Energy Catapult, The IET Power Academy, the Conseil International des Grands Réseaux Electriques (CIGRE), the European Energy Research Alliance and as ScottishPower Chair in Smart Grids at the University of Strathclyde. In recent years, has given advice on electricity system issues to the Scottish Government, Ofgem, BEIS and the Government of Ireland, amongst others.

Commenting on his appointment, Professor Bell said: “The science is clear: man-made climate change represents a significant threat to the environment, lifestyles and economies of the world. As one of the world’s leading economies, the UK has a responsibility to play its part in tackling this challenge. Real progress is being made around the world in decarbonising electricity; that journey is not yet complete with some serious issues to tackle, but an even greater challenge in the energy sector now is decarbonising transport and heat.

“It’s a privilege to become a member of the CCC but also a big responsibility in light of the importance of the issues that it is addressing. I look forward to working with the other members of the Committee and bringing my experience in energy systems, specifically electricity systems, and my knowledge of the energy landscape in Scotland to help advise the UK Government and Devolved Administrations on how best to meet our commitment to reducing carbon emissions.”

“I am thrilled to welcome Professor Keith Bell to the Committee on Climate Change. Keith brings extensive experience from his work within the power sector and his expertise will be vital as we look to the solutions for decarbonising transport and heat.

“I’d also like to express my sincere thanks to Professor Jim Skea. As a founding CCC member, Jim has been instrumental in the Committee’s work and subsequent success over the last ten years. The Committee has truly benefited from Jim’s insight and knowledge, which in turn has helped to ensure our recommendations to Government and Parliament have been firmly rooted in the science.”