On July 18th, seven of us working on the upcoming CCC Bioenergy Report took a trip to Southwark to have a look at the work of Uptown Oil, a business that produces biodiesel from used cooking oil. The trip was a chance to see how biodiesel can be produced and used sustainably, at a local level. The refinery began producing biodiesel in 2007 – but was recently put in the spotlight after signing a contract to supply Price Waterhouse Coopers (PwC) with biodiesel and featuring on the BBC TV Programme, Megacities. 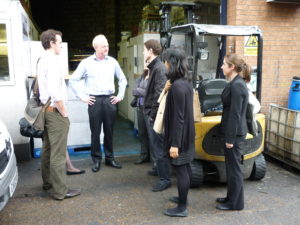 Uptown Oil collects used vegetable oil from about a thousand sources in London – including Young’s pubs, Selfridges and Hackney Borough Council. This is then processed on site into biodiesel and sold. The oil that is produced at Uptown Oil is rated at B100 – which means it is 100% biofuel. Jason Askey-Wood, our host, informed us that they have the capacity to produce about 50,000 litres per week. By-products (of which there are few) are passed on for re-use: for example the glycerol can be used to make soaps. This limits any waste.

Diesel cars can be run on biodiesel without requiring an engine update and much of the biodiesel produced at Uptown Oil is sold to London cab drivers. While we were there, we saw lots of cabs having their tanks filled. There is currently a price incentive for them to do so as biodiesel sourced from used cooking oil is cheaper than diesel  due to a 20 pence per litre duty differential. Jason fears that the removal of this differential, which is due to occur in 2012, will seriously damage its competitiveness as a road transport fuel.

According to Uptown Oil, CO2 emissions from biodiesel are about 80% lower than from normal diesel, and the exhaust releases about 60% less particulates, helping create cleaner air in the capital.  Jason argues that given these environmental benefits, such enterprises should be encouraged by the government.

It is not only transport fuel that Jason and his team supply, they recently secured a contract to provide biodiesel to PwC’s headquarters in central London. The office has been awarded an Outstanding BREEAM rating for its environmental design so we headed over to 7 More London to take a look. We were shown around by Jon Barnes, the Head of Building and Facilities Services at PwC, who told us that thousands of litres of biodiesel are delivered from Uptown Oil per week, 15% of which is recycled from the office’s own used oil. The biodiesel is used to generate 25% the total energy used, via a tri-generation system, and provides heating and cooling around the building. Looking around, we got a good insight of how biofuels can be used in practice in such a large building.

The CCC’s Bioenergy review is to be released at the end of 2011.