Last week a misleading campaign was launched by the Taxpayers Alliance about the impact of Government policies on household energy bills (analysed in a separate CCC blog).

This week, RWE npower have published their analysis of the prospects for future energy bills.

The npower report resulted in headlines suggesting that the Government’s low-carbon policies will add £240 to household energy bills by 2020.

However, a closer look shows that the £240 includes the cost of low-carbon and other Government policies, some of which may be overstated, together with grid investment costs. The report suggests a figure for support of investment in low-carbon technologies that is broadly similar to our estimated £100 impact in 2020 compared to 2011.

The difference between the £100 impact and the £240 headline is largely accounted for by estimated costs of £115 due to grid investment, the vast majority of which is not related to low-carbon policies.

The npower analysis also adds costs for smart meters, despite the conclusion from DECC’s impact assessment that most of the costs will be recovered through offsetting cost reductions for energy companies. The costs of investment to maintain security of supply in the npower analysis are largely unrelated to low-carbon policies, and could be offset by lower electricity prices than would be the case without this investment.

The npower report makes an important point that there is a risk of cost escalation in the Energy Company Obligation (ECO). This is the new policy to support energy efficiency improvement in the residential sector. If large subsidies are required to encourage uptake of solid wall insulation, then ECO costs could be higher than estimated by the Government. This is something we will consider in more detail, including an assessment of risks and mitigating measures to ensure that costs of energy efficiency policy are maintained at current levels.

The npower report highlights the importance of energy efficiency improvement in offsetting future bill increases due to low-carbon policies. This is consistent with our analysis, which shows scope to reduce annual bills by £145 on average in 2020 through a combination of insulation, boiler replacement, and more efficient appliances. However, we have suggested that new policies with stronger incentives may be required in order that this potential is fully addressed.

The npower report also argues that there should be transparency about costs associated with low-carbon policies. We strongly agree and will continue to publish our assessment of energy bill impacts due to low-carbon policies in order to try to ensure that public debate is based on evidence and facts. 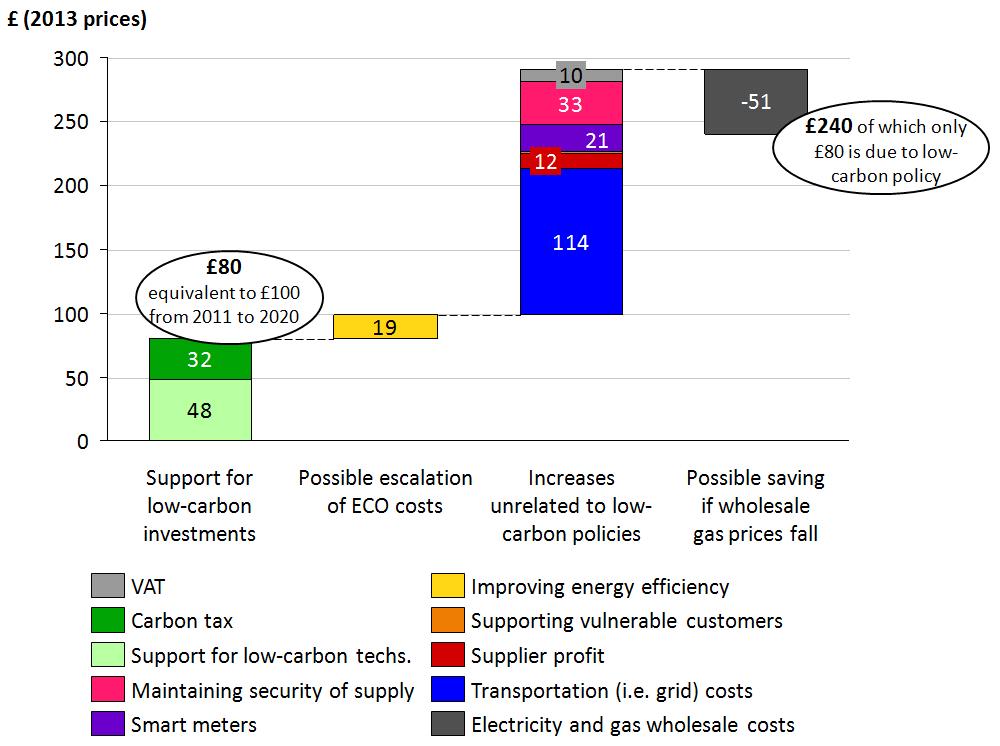 This chart shows when removing the non-carbon impact and the decrease from wholesale prices, npower estimate that dual-fuel bills will increase by £80 due to low carbon policies.