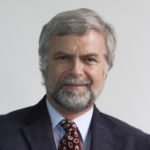 By Jim Skea, Committee member.
Sorting fact from fiction is becoming central to the climate change debate. In the aftermath of Copenhagen and with Cancun looming ahead, Jim Skea distinguishes between what can be done and what must be done…

“There are two approaches to meeting the challenge of climate change. One way is to ask how quickly we can decarbonise the global economy if dangerous climate change is to be avoided, the other is how quickly we must do so. How much common ground is there between the two? If they were two hands reaching out to each other, no one would say they are clasped in a firm handshake, but at least the fingertips are touching.

Last December’s Copenhagen Accord aims to keep global temperature increases below 2°C, and is commonly associated with reducing all greenhouse gas (GHG) emissions around the world by around 50% by 2050, and those from developed countries by around 80%. Yet the scientific truth is that keeping temperature increase below 2°C cannot be guaranteed. Probabilistic modelling work shows that if we can assume global emissions peak in 2016 and fall by 4% a year thereafter, there is still a 50% chance that the 2°C threshold will be exceeded. If emissions fall at only 1.5% per year that probability rises to 80%.

There are also compromises on the “can” side of the debate. Among the stream of recent studies is one from the European Climate Foundation that shows it would be technically and economically feasible to reduce emissions by 80% at an affordable cost less than 1-2% of GDP. It is also often noted that 80% reduction targets are feasible, but require step changes in the delivery of policy, and thus the exercise of political will.

The term “challenging” is often used in the debate on how to tackle climate change, so it’s worth exploring what is meant by this euphemism. There are two key elements; the first is that governments are orchestrators of societal action, but they are not the agents of practical change. It is the role of the private sector and citizens that is critical to investing in and driving forward low carbon solutions. Given the urgency and scale of action required, establishing trust between private and public sectors and as well as a shared understanding of the way forward is fundamental. For governments, this translates into a need for clear, stable, long-term policy signals that are developed with buy-in from the private sector”.

This is an excerpt from an article originally published on Europe’s World.

You can read the full article here.