With new European environmental legislation set to close many existing coal fired power stations by 2015, work is already underway by Tilbury power station to convert it into one of the world’s largest dedicated biomass generators . Ahead of its scheduled re-commissioning in November, a few members of the CCC made a visit to the Essex based plant earlier this month to see how work was progressing.

The 1,050MW coal fired Tilbury ‘B’ plant had been generating electricity since 1967. However, EU legislation to reduce emissions under the Large Combustion Plant Directive (LCPD) prompted the owner, RWE npower to look at options that could extend the life of the plant. Work for the first phase will see a switching of feedstock from coal to biomass, with a generating capacity of 750MW. Life cycle CO2 emissions are expected to be around 80% lower than for a similar sized coal fired power station. However, as Nigel Staves, the station manager pointed out, the plant will still be required to close under the LCPD unless a secondary more comprehensive and costlier programme of works is carried out in order to meet new plant regulations. Npower is currently looking at options to do this. 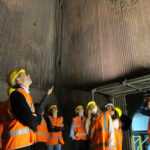 Located on the Thames Estuary, Tilbury will rely on imported sources of wood pellets that will be delivered to its own jetty.  The issue of sustainability was at the forefront of everyone’s minds, given the large volume of biomass feed that it expects to consume each year. But with feed derived from pine beetle damaged wood and timber residues from British Columbia and Georgia in the USA, npower are satisfied that the feedstock under the first phase will be sustainable.  Should the second phase proceed, npower is undertaking R&D into alternative feeds to forestry materials. These alternative feeds are not expected to become available until the next decade or two.

Although the plant was closed for the conversion, a tour of the site enabled us to see up close some of the technology involved in the process of generating electricity. This included standing inside one of the vast 55m high furnaces where temperatures can reach up to 1,100 degrees to heat re-circulating purified water to produce high pressure steam to drive the turbine.  Our tour ended in the control room of the plant. 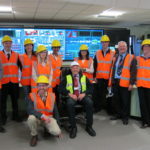 The CCC’s Bioenergy review will be released at the end of 2011. This will include our detailed assessment of investment in biomass power generation, focussing on technical feasibility, economics and availability of biomass supply.