On a cold January day, I joined our Chairman Lord Deben, other members of the Committee on Climate Change and colleagues from the CCC secretariat on the train at Kings Cross to head to Edinburgh for our January Committee meeting. This was the Committee’s first meeting to be held outside of London, and the first to be open to the public. We had invited a number of stakeholders to submit evidence towards progress in meeting Scotland’s climate change targets, opportunities and challenges in different sectors.

Before the following day’s committee meeting however there were a number of other meetings to attend on arrival in Edinburgh. The Committee met with Members of Scottish Parliament and the RACCE (Rural Affairs, Climate Change and Environment) committee to discuss Scotland’s progress on climate change. I went to meet with Scottish government analysts in Leith to learn more about the work they do and how we can work together. We then all had dinner with Dr. Aileen McLeod, the Minister for Environment, Climate Change and Land Reform and Scottish government officials. Apart from discussing the challenges faced by meeting Scotland’s ambitious climate change targets, we all enjoyed some haggis (including a vegetarian option).

On Friday, the Committee meeting was hosted by the Edinburgh Centre for Carbon Innovation in its award winning, green building. The aim for the day was to gather evidence for the upcoming Scottish Progress report that we are due to publish in March 2015. The report will focus on the 2012 greenhouse gas emissions target but will also look at how progress is being made in individual sectors. 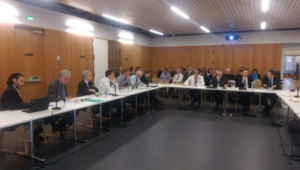 The morning kicked off with a presentation by John Ireland from the Scottish Government. Following this, Friends of the Earth Scotland (FOES), WWF and Sustainable Scotland Network told us that there is a need to move policies and proposals from aspiration to delivery. FOES also argued there were inconsistencies between climate policy and oil and gas policy and the need for Scotland to showcase its action elsewhere in the UK. WWF pointed to transport as a key area for more policy. The following sessions focused on a number of different sectors. On energy supply, the Committee took evidence from Scottish Renewables, Community Energy Scotland, Scottish Power and SSE. The main messages were that stakeholders would like to see clarity on the post-2020 levy, especially for offshore wind. Renewable heat was also on the agenda with a focus on the longer-term investments in district heating schemes. During the energy efficiency and fuel poverty session, the discussion revolved around lack of funding, loss of skills and behaviour change in homes and transport.  The Energy Saving Trust left us with a clear message for future policy – evolution is better than revolution. In the agriculture and land-use session, the National Farmers Union Scotland and Scotland Land Estates (SLE) argued that abatement measures in farming should stay voluntary. Peatland restoration and afforestation rates were a hot topic too.

We finished the meeting with a session on behaviour change. This had already been touched on in previous sessions, with emission reductions in transport and energy efficiency in particular requiring changes in behaviour. Louise Macdonald from Young Scot argued that policy makers need to involve younger people more, and a combination of information and rewards was proving successful at motivating young people in Scotland.

Overall, the Committee felt that the meeting was a great success. The public gallery was full for most of the day showing that there is lots of interest in the Committee’s work in Scotland.  We were able to gather lots of important evidence to inform our upcoming report and meet with a range of stakeholders. Although this was the first meeting in Scotland, it certainly won’t be the last and we look forward to working with Scotland more closely in the future.