The COVID-19 pandemic saw the launch of our annual Progress Report to Parliament move online this year. This was a new format for us and the webinar we ran had a number of advantages over a physical event, receiving positive feedback from attendees. It was great to have so many people join the discussion from all four nations – and it has certainly given us pause for thought; we fully expect to run more web-based events in the future.

Another advantage was that we were able to record the questions our 450 attendees wanted to ask us. We did our best to cover as many as we could during the live event but unfortunately didn’t have time to get through all 111. In this blog we seek to answer some of the most popular questions, grouped into eight key themes. If you missed the webinar, you can still watch it here.

Q: Retrofit of buildings for net-zero emissions is critical, but always the ‘poor relation’ in policy – where is the leadership in UK government to drive innovation? And who pays?

Reducing emissions from the UK’s buildings is one of the great challenges of the net-zero transition, and questions about this topic were by far the most popular, with several people wanting to know about policy support for retrofitting existing buildings.

There’s lots of interesting content on this in our Progress Report – head to pages 176-179 to read our proposals. It also cuts right across departments, with recommendations for BEIS, Treasury, MHCLG, DfE and more, so leadership from the top will be vital. Policy to date has failed to meet the size of the challenge.

However, there is also opportunity here. The COVID-19 recovery provides a real chance to prioritise retrofits to improve the carbon performance of homes, commercial and public buildings. It’s a win-win: these projects are labour-intensive creating jobs whilst bringing direct social benefits including more comfortable buildings, improved health and well-being.

There was welcome news on this front in the Chancellor’s Plan for Jobs 2020 published last week, announcing £2 billion of funding through the Green Homes Grant. The scheme, which aims to upgrade over 600,000 homes before the end of the financial year, will provide a contribution towards the installation of household energy efficiency measures while fully funding the measures for low-income households. The Chancellor also announced £1 billion in grants over the next year for public sector bodies, including schools and hospitals, to fund both energy efficiency and low-carbon heat upgrades. Starting with public buildings can help set an important standard for others to follow.

The challenge, as we highlighted in our response to the Chancellor’s announcement, is two-fold. Firstly, to make sure these funds are well spent on good-quality installations that make real savings in energy use without introducing problems for over-heating or indoor air quality. And, secondly, to make this stimulus the start of a longer-term transformation and ensure the new green jobs it creates endure beyond 2021. The Government needs to move fast and move smart to make it work.

The Government has committed to publishing a Buildings and Heat Strategy later this year. It must set a clear long-term direction, make low-carbon options pay, tackle the many delivery barriers and take immediate action to drive progress. Anything less would be an opportunity missed. As well as last month’s progress report, our 2019 report, UK Housing – Fit for the Future?, sets out some of the critical detail we’ll be looking out for, and we’ll continue to actively scrutinise progress in this area.

Q: How can we reduce emissions from land use and agriculture?

We had a range of questions on land use and agriculture, highlighting its importance in tackling climate change, but also the complexity of reducing emissions from this sector. Questions covered methane-suppressing feed for cows, ambition on reducing meat consumption, embedded emissions in food, setting a date for a ban on peat burning, and proposed changes to the UK Government’s Environment Bill. All crucial questions that are high on the Committee’s agenda for both climate change mitigation and adaptation.

Our report published in January, Land use: Policies for a Net Zero UK, provided in-depth advice on the changes required in how we farm and use land in order to deliver the UK Government’s Net Zero greenhouse gas emissions target by 2050.

Emissions from agriculture and land use have remained broadly flat in the past decade and voluntary approaches have so far failed to cut agricultural emissions or significantly increase tree planting rates.

In our Progress Report this year we highlighted that the Government has included climate mitigation and adaptation as key ‘public goods’ to be paid for as part of the UK’s overhaul of agriculture and land policy through the Agriculture and Environment Bills. That’s an important recognition, and now must be backed by strong effective policies to deliver the transformational change that is needed. Our recent letter to Parliamentary Under Secretary, Victoria Prentis MP, outlined our expectations of Defra’s proposed Environmental Land Management Scheme and its core principle of ‘public money for public goods’.

Q: Can we have a universal service expectation for Electric Vehicles and charging which does not leave the rural economy behind in the petrol/diesel phase-out?

Our Progress Report recommended expanding the network of charging points for Electric Vehicles as a priority investment in the COVID-19 recovery. We recommended that the Government commit to a 2032 switchover date by when all sales of petrol and diesel cars and vans (including hybrids) should be phased out. A strong charging network will be a vital enabler of that switchover. We also recommended that the Government introduce a mandate to ensure manufacturers are selling increasing proportions of zero-emission cars.

A substantial charging network is already in place and continuing to grow from a negligible figure in 2010 to over 30,000 charge-points in 11,000 locations across the UK today. Whilst these chargers are largely concentrated in urban areas, coverage UK-wide has increased.

The network will need to keep growing to meet the needs of a growing electric fleet, and we endorsed the ambition of Project Rapid, under which the Government has pledged £500 million to support the development of rapid charge hubs along the strategic road network and major roads. A key gap though is charging for those of us without off-street parking, for shared car parks and for renters. Government may also need to intervene to ensure chargers are provided in less connected areas where commercial offerings might not be viable.

Q: What role do local authorities have in getting the UK to Net Zero?

We had local authority officials join the launch webinar from rural areas, towns and cities across the country. This perhaps reflects the fact that cities and local authorities are well-placed to understand local needs and opportunities in the transition to Net Zero, with two thirds of local authorities now having declared ‘Climate Emergencies’. Local authorities can support key priorities identified in our Progress Report through:

There are many challenges to effective delivery of Net Zero at a local level, including inconsistent reporting across the country and a lack of resources which can mean that climate change is lost amongst many competing priorities. The Government should incentivise, support and enable local authorities to deliver emissions reductions and climate adaptation measures at a local level. Cities need to be enabled to collaborate, scale up programmes and share lessons learned, such as successful experiences of retrofitting Victorian terraced houses.

The Committee is considering the positive role that Local Authorities, city regions and combined authorities can play and expect to publish further advice on this as part of our work on the Sixth Carbon Budget later this year.

Q: Do you have any analysis about how Scotland, Wales and Northern Ireland are progressing?

Unfortunately, as every year, the latest emissions data for Scotland, Wales and Northern Ireland were published too late to include in our Progress Report. However, that data is now available. Emissions continued to fall in Wales (-8%) and Northern Ireland (-3%), but increased in Scotland (+2%) from 2017 to 2018 for the first time in several years.

We will dig into these trends when we deliver our annual Progress Report for Scotland later this autumn and our first ever Progress Report for Wales before the end of the year, alongside new advice on Wales’ climate targets between now and 2050. We will also be offering advice to the Northern Ireland Executive on a fair contribution to meeting the UK’s Net Zero target.

Scotland, Wales and Northern Ireland have outperformed the UK Government in some key areas in recent years. Scotland has been ahead of the rest of the UK in decarbonising its electricity generation, has planted more trees, and has set a clear roadmap for decarbonising buildings. Wales has led the way on recycling and is now taking steps to move towards a circular economy. Both were close to being on course to meet their next major climate targets for 2020, and will now likely outperform them due to the impacts of COVID-19.

Northern Ireland was a year early in meeting its target to produce 40% of all electricity from renewable sources by 2020, and has more than halved its emissions from waste in the last decade. Northern Ireland’s New Decade, New Approach power-sharing agreement included new commitments to introduce legislation and targets for reducing carbon emissions in line with the Paris Agreement. The Committee is ready to support the Executive in their efforts to set – and more importantly take actions to meet – any such targets.

The UK Net Zero target will only be achieved if devolved governments and the UK Government work effectively together. Likewise, Scotland’s and Wales’ existing climate targets are only achievable with the right support from Westminster. 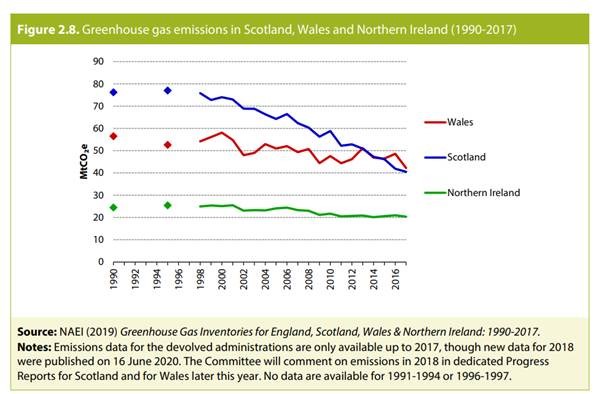 Q: Does your report consider how the five priorities for immediate investment will influence and support the UK’s adaptation response (e.g. investment in green infrastructure to alleviate flood and heat risks)?

Four of the five priorities we identified for immediate expansion to support the recovery are important for both mitigation and adaptation:

More generally, there are important overlaps in buildings (e.g. where the overheating risk must be managed alongside improvements to energy efficiency and a shift to low-carbon heating systems) and land use (e.g. where new forests and bioenergy crops must be suited to the future climate). We will explore these, and other overlaps further in our December advice to Government on the Sixth Carbon Budget, which covers emissions reductions in the mid-2030s and in our evidence report for the next UK Climate Change Risk Assessment (CCRA3) due to be published next summer.

Q: If all of the recommendations in your progress report are followed, will the UK be on track to achieving Net Zero emissions in 2050?

We will set out the detailed pathway to Net Zero UK emissions when we publish our recommendation on the level of the Sixth Carbon Budget in December. This will present, for the first time, a full set of measures across the economy for every year from now through to 2050 which will put the UK on track to reducing its emissions to Net Zero in less than 30 years. The Government is required to respond to that advice and legislate the new carbon budget by June 2021.

Q: Has the CCC asked the Government to add emissions reductions to its procurement rules?

In our Progress Report, we highlighted the priority for all departments and the public sector more broadly to ensure procurement strategies are consistent with the UK’s climate objectives. The public sector is a huge player across the economy. By leading by example the Government can support the development of low-carbon markets and standards that act to reduce emissions, as well as taking action to address overheating, green space and sustainable drainage. At a minimum, Government should deliver the commitment set out in the 2017 Clean Growth Strategy to halve emissions across the public estate by 2032 at the latest.