District heating networks are largely an unknown quantity in the UK, where the gas boiler is both ubiquitous and cheap. Contrast this with Denmark, where two thirds of space and water heating is delivered through pipes to buildings in the form of hot water or steam.

Producing heat in this way has a number of advantages – it provides a market for the heat from Combined Heat and Power (CHP) plants, which means you can boost the efficiency of electricity production by around 30-50% compared to conventional power plant. Networks are highly flexible, meaning you can integrate new heat loads and, over time, switch over to low-carbon energy such as electric heat pumps or biomass. They can also provide a valuable means of balancing the growing share of renewables on the electricity grid, particularly when combining large hot water storage with CHP and heat pumps. Finally, heat networks can connect buildings in high density urban areas where individual heat pumps or biomass boilers are unfeasible due to space requirements.

This is why our decarbonisation pathways feature a key role for heat networks in meeting the 2050 target, which will most likely require a near total decarbonisation of the building stock.

It’s worth noting that in the past, poor scheme design, inefficient systems and poor user functionality mean that district heat suffers from an image problem, although recent high efficiency systems going into new homes are going some way to address this issue. However, the main reason behind the contrasting positions in the UK and Denmark is down to the ready supplies of cheap gas from the North Sea. In Denmark, the 1970s oil crisis sparked a drive for efficiency which saw the expansion of local authority-led CHP schemes. It therefore provides a useful example for thinking about how the UK can in time move away from gas.

With this in mind, a few of us headed over last week to the Citigen district heating and cooling scheme which occupies a grand old building in the heart of Smithfields market, emblazoned with the building’s old function – ‘Port of London Authority’.

Over two miles of pipe crisscross the city in a half loop running east across to the Barbican Centre and Guildhall, linking in Smithfields market, a police station and the City of London Corporation offices along with a mix of private sector customers. 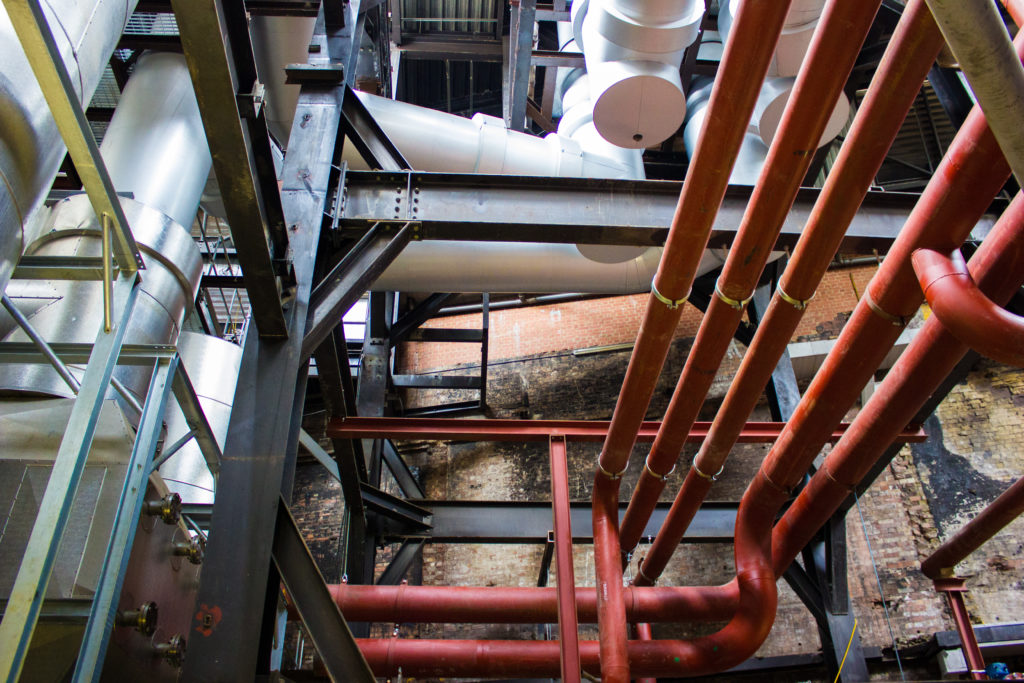 There is something quite impressive about the dense network of pipes and machinery set against a backdrop of the aging exposed brickwork. The building itself originally housed a coal-fired power station built at the end of the 19th Century with iron shipped down from the Peak District.

The Citigen system was built a hundred years later, initially with two modified ships’ engines running on diesel and gas. These have recently been stripped out, soon to be replaced with two new gas CHP engines. Other changes are afoot. The diesel for the old CHP engines was stored in a colossal tank about 30 metres high. Removing this has created space for a large hot water thermal storage tank, allowing the plant more flexibility in choosing when to operate and responding to changing prices. What I hadn’t anticipated was the sheer height of it, as we peered down through the gangplanks to the floor below and then back up to the high ceiling above.

As well as producing heat and electricity, chilled water is piped through a separate set of pipes to the office blocks on the network, produced by four large chillers which hummed gently as we walked by.

After the tour, we sat in the Citigen offices and talked about the scheme expansion plans over a cup of tea. London is currently straining to meet a targeted 25% of its energy needs from local/decentralised energy plants by 2025. This is helped by a requirement for developers of new buildings to first look at connecting to a local heat network before designing individual heating systems. Whilst this provides a ready market for network developers, expanding into existing buildings through retrofit is typically much trickier. This suggests that under current policies, it will be a struggle to meet the target without strong growth in new build or additional policies targeted at existing buildings.

There are also big questions around who will own and operate the schemes. Unlike electricity and gas, heat is currently unregulated. Whilst heat networks need to compete on price with other forms of heat, surveys highlight consumer concerns at being ‘locked-in’ to contracts. Consumer groups like Which? also point to the lack of transparency in the varying approaches to pricing. This contrasts with the Danish public ownership model, where all prices are published online.

Here at the CCC, we’ve just kicked off a research project which is looking at the role heat and cooling networks can play to 2050, feeding in to our Fifth Carbon budget advice to Government later this year. The work is going to focus on transitions – both from high to low-carbon but also from high to low temperature networks (these are generally better suited to heat pumps). It’s also a chance to consider questions around different owner and operator models and assess the policies required to achieve different levels of heat network uptake over the next 20 years. If you’re interested in feeding in to our thinking, please email jenny.hill@theccc.gsi.gov.uk.

This blog was written by Jenny Hill who heads up the work on heat in the CCC secretariat.